We present the second recipe along with homemade bagels with caramelized banana and chocolate-nut cream from Bagel Bros – inspired by The Last of Us II. In the previous post you will also read a mini-review of the game (in short – yes, it’s soooooooo worth playing!) And an insight into the culinary details of the locations that we have the opportunity to visit in the game. 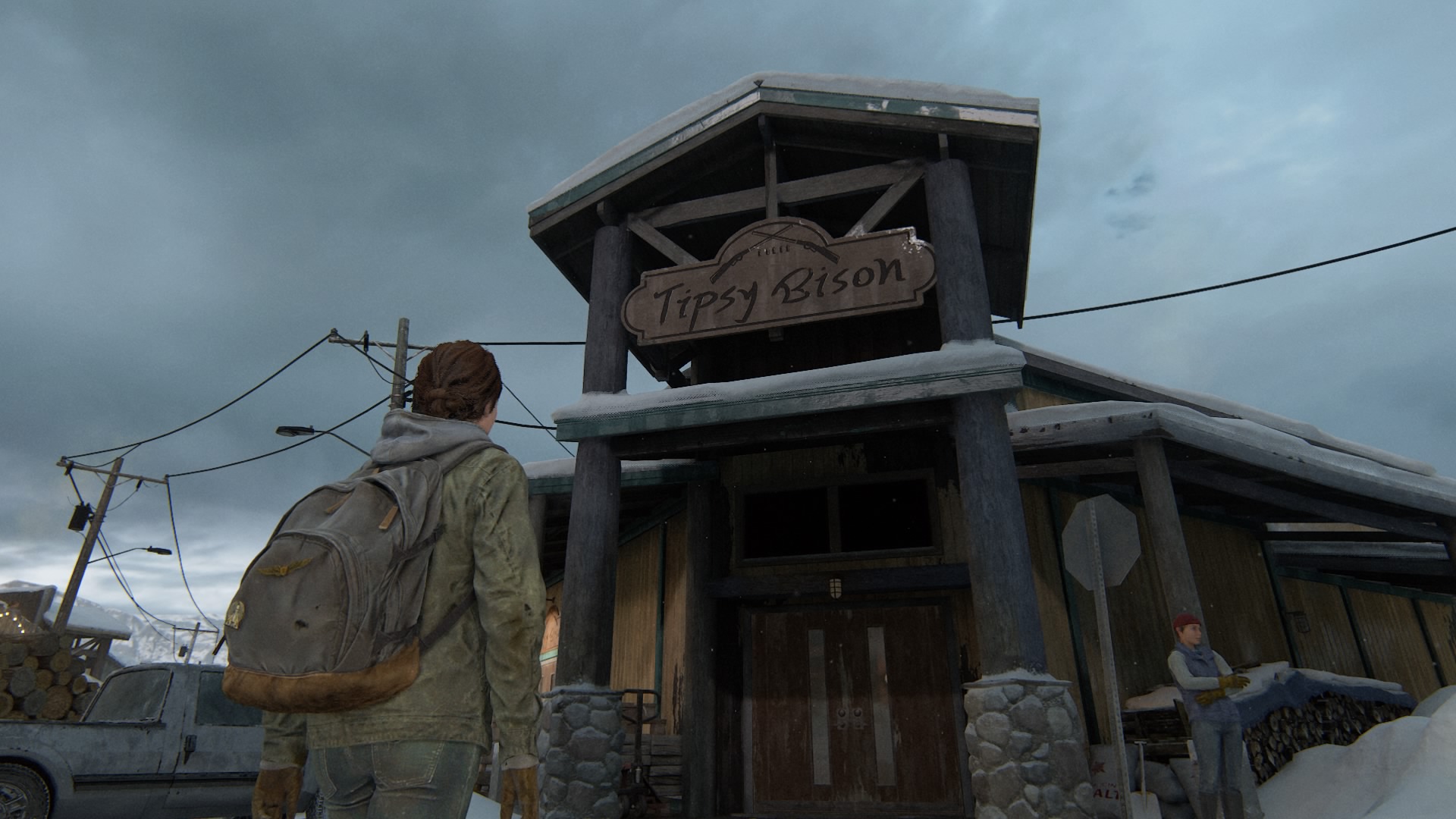 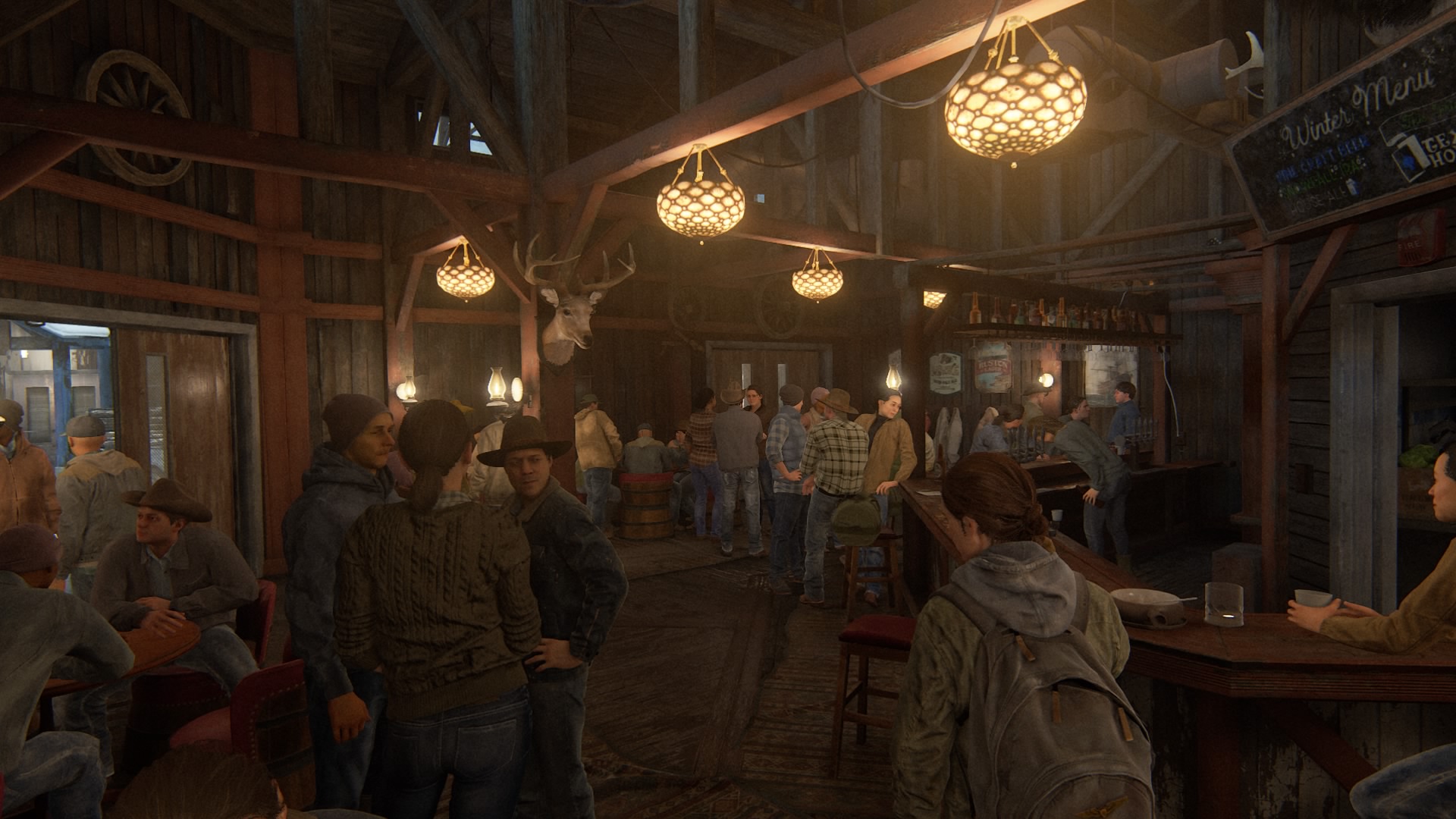 This time, in turn, we will refer to a specific cutscene, which takes place still in Jackson, where Ellie and Joel settled after the events of the first game. It is a reference to the incident, which is a continuation of the teaser appearing in gameplay trailer from 2018. One of the participants of the event was not very polite towards Ellie, so during her visit to the Tipsy Bison restaurant, the guilty one wants to express his sorry by offering steak sandwiches to Ellie as a snack for the next patrol. However, she refuses and calls the sandwiches as “bigot sandwiches”, passing the gift to her patrolmate, Jessie. Due to the quite controversial tone of this scene and the words, the phrase “bigot sandwiches” has become some kind of a meme among the fans of The Last of Us series. However, apart from the message of the scene itself, the fact that food is brought to the light here is another proof that the culinary element does not necessarily have to be found only in the crafting mechanics to be important during the game! 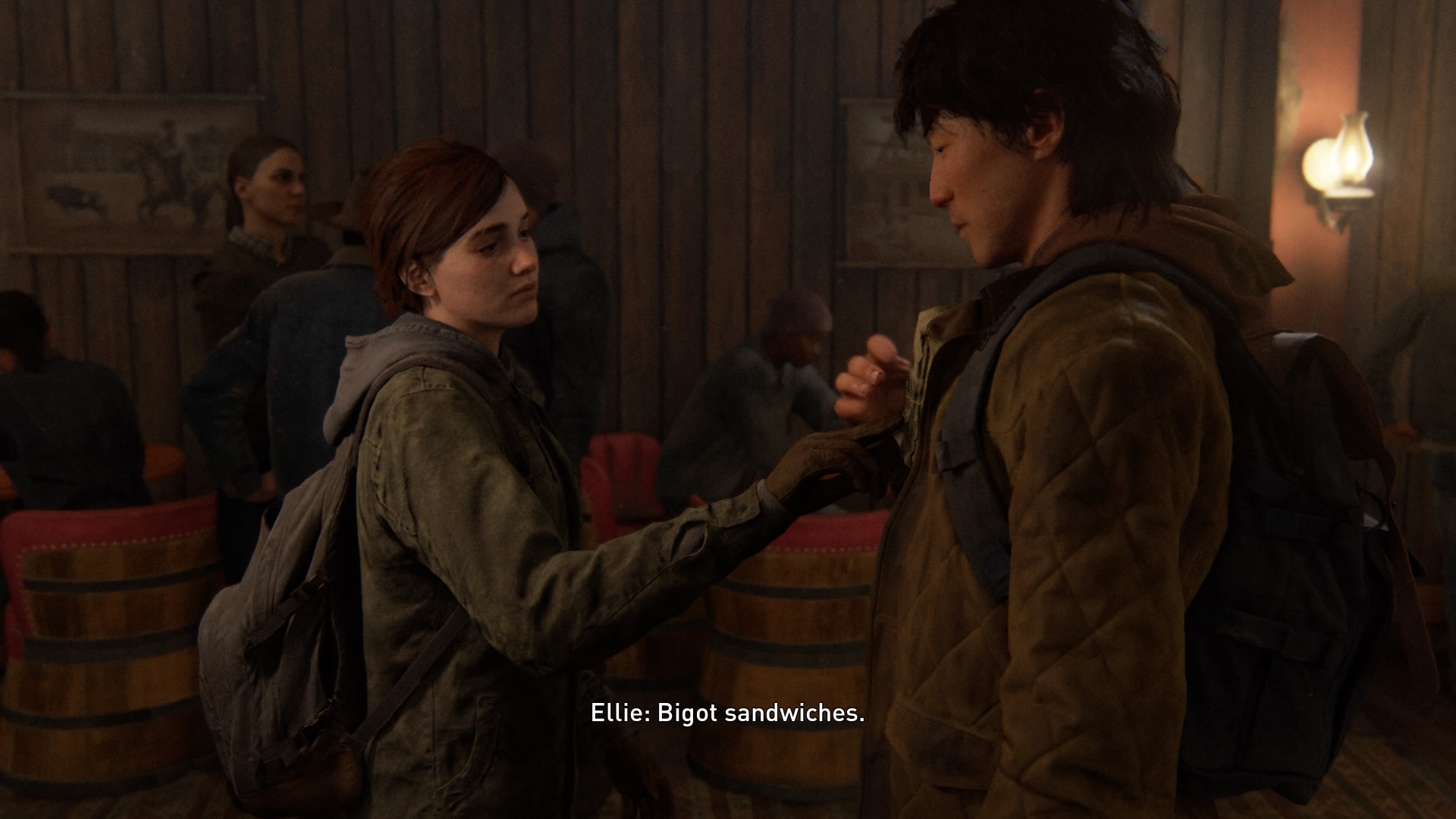 Thanks to more attention to the details of the locations, we can see where Seth gets the ingredients for this snack. Near the Tipsy Bison inn, on the streets of Jackson, there is both a well-stocked butcher shop and a bakery. A bit further you can see the “greenhouses” where vegetables and fruit are grown (despite the frosty weather). In turn, the pub itself is filled with people, despite the very early hour. The walls are decorated with themed ornaments characteristic of American hunters, and the lighting creates a cozy atmosphere. You would definitely like to spend more time here, especially since the frosty weather outside the door does not encourage you to go out for a walk! 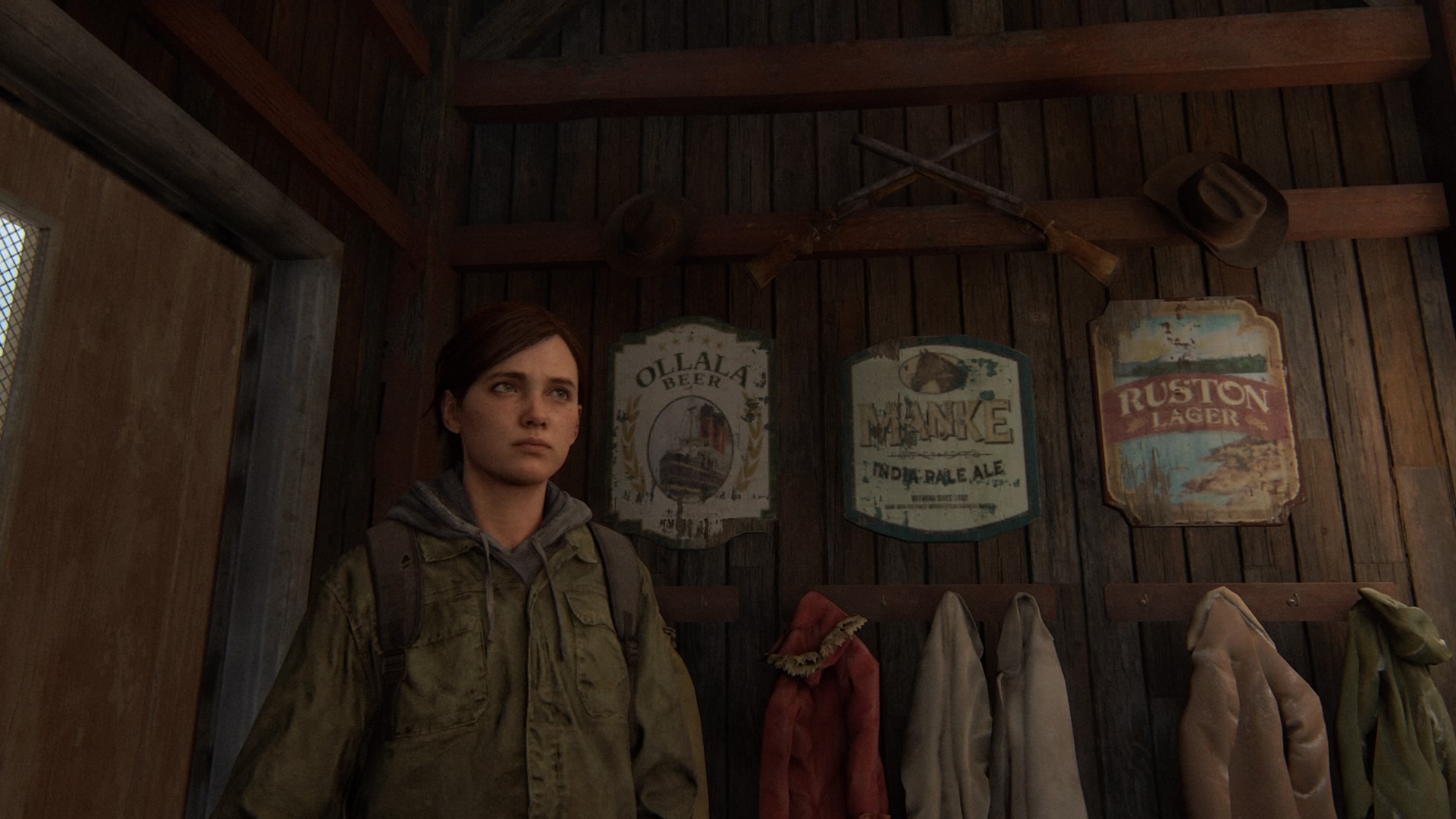 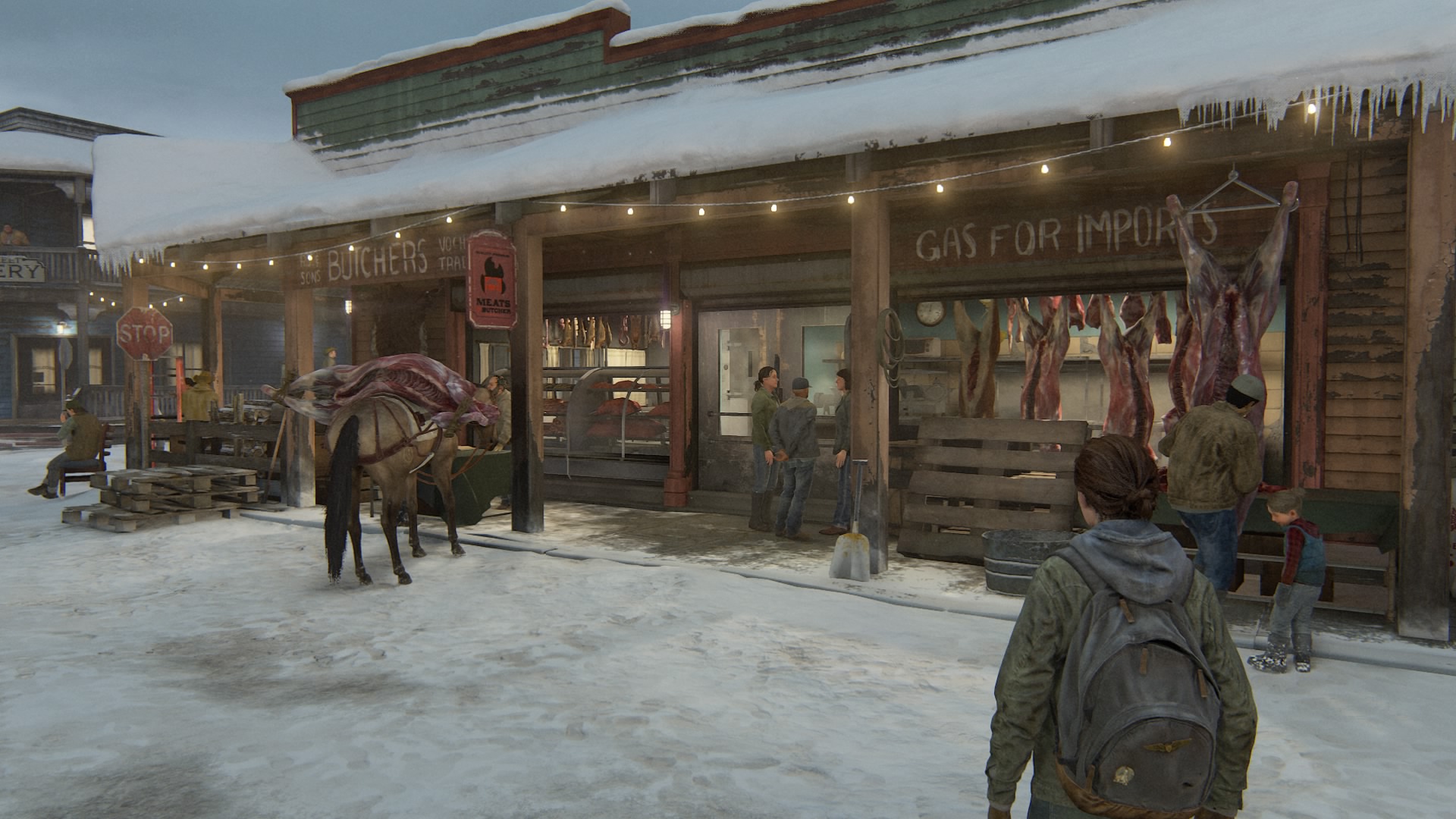 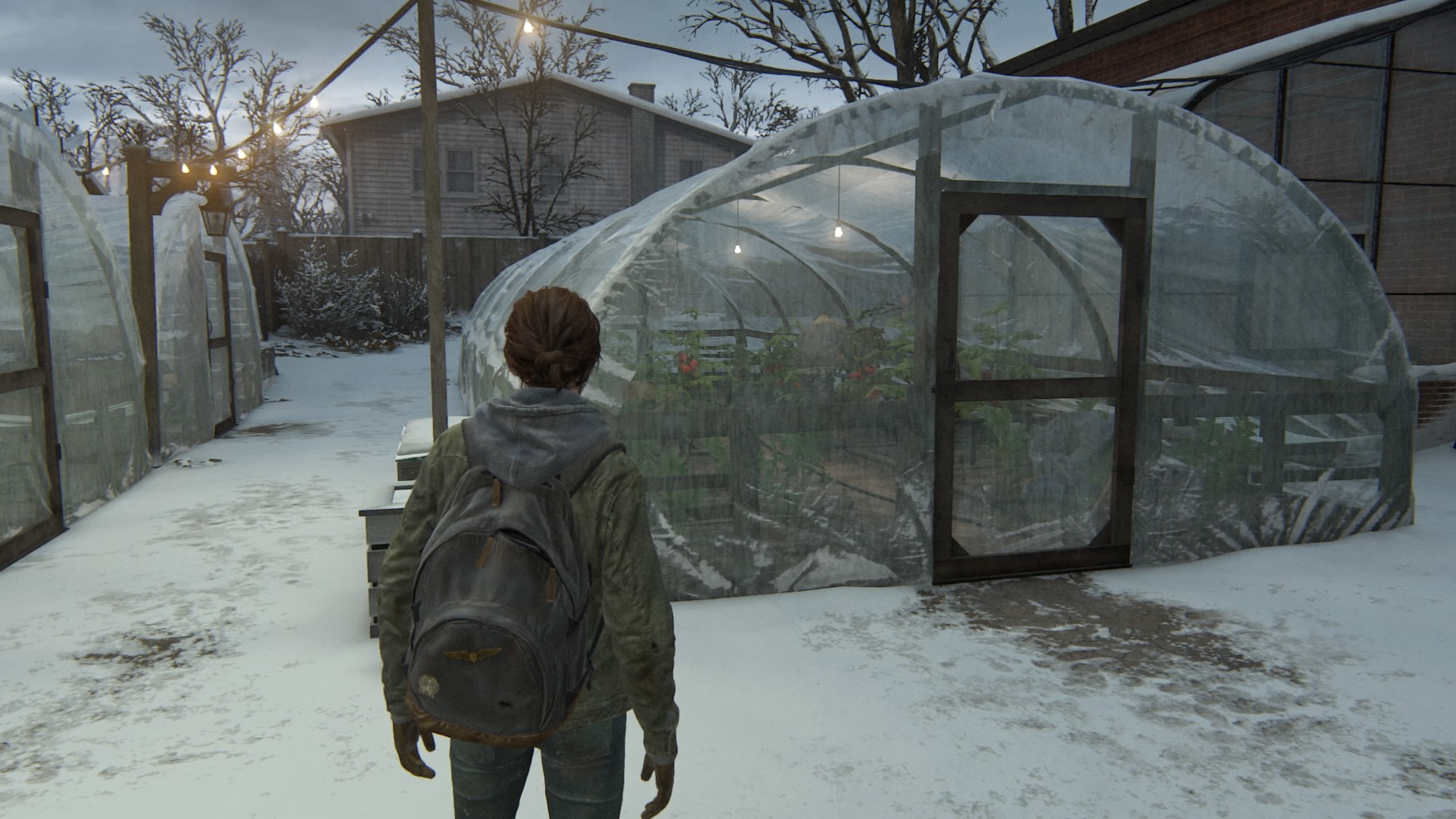 I suspect that for Jackson’s conditions, the steak could probably be made from a piece of venison, and of course you can try this version if you have access to this type of meat. In the “normal” situation, we will use a standard beef steak, but pay attention to the fact that it is seasoned/matured, so that it will be tender after a very short heat treatment. I added fried kale to the juicy pieces of meat – I think it is a very underestimated vegetable, which after frying takes on a completely different dimension, and also perfectly suits the winter conditions of Jackson – it is a plant that yields crops in winter, and it’s even better to pick it after frosts, because it loses its bitterness. As an addition to the sandwich I used caramelized onion and spicy mayonnaise sauce with chili flakes and pieces of dried tomatoes to break the taste. Plus a crispy, rustic baguette and it’s safe to say it’s a really neat sandwich! If only Ellie knew what was hidden in the carefully closed package, she would not have given away this delicious gift so easily!

STEAK SANDWICH
The Last of Us II
sandwich with beef steak, fried kale and caramelized onions with mayonnaise sauce with chili and dried tomatoes 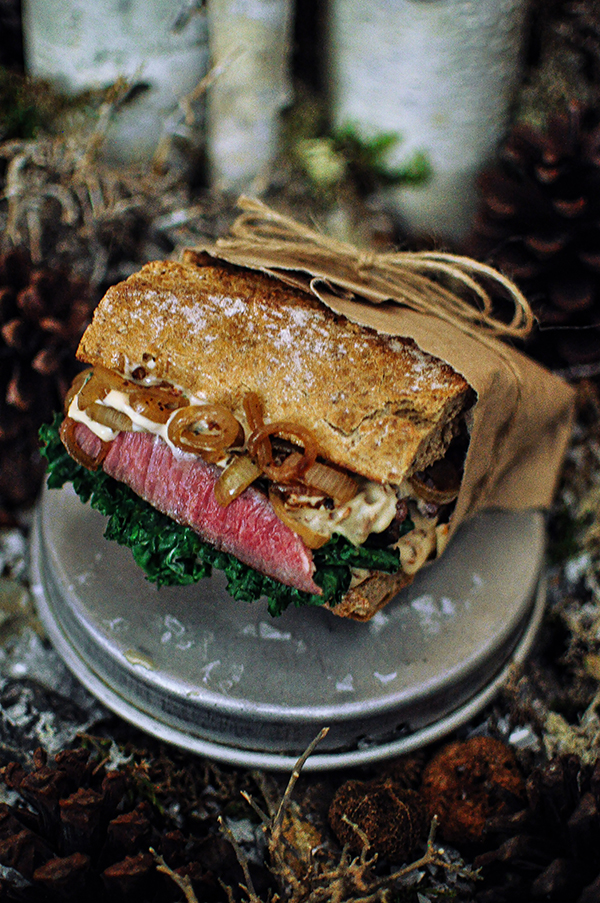 Add mayonnaise, chili flakes and finely chopped sun-dried tomatoes to the bowl. Mix thoroughly and set aside in the refrigerator.

Place the fresh kale in a strainer and pour boiling water over it. Cut off the hard stalks from the leaves. Pour a teaspoon of oil into the hot frying pan and add a teaspoon of butter. Add chopped garlic, cook for 30 seconds, then add the kale leaves and lightly salt it. Fry over medium heat for about 5 minutes, stirring frequently, until the kale is lightly golden.

Add a little oil to the hot pan. Add the chopped onion, add a pinch of salt and 1 teaspoon of sugar. Fry over medium heat for 2 minutes, then add 2 tablespoons of water and fry for 5 minutes, until the onion is sticky and turns brown.

Take the meat out of the refrigerator to room temperature for approx. 30-40 minutes before frying. Heat the pan well and pour a little oil over it. Season the meat generously with coarsely ground pepper and sprinkle with dried parsley. Place the steak on a hot frying pan and fry it over medium-high heat, the meat should sizzle immediately after it is placed on the pan. After 1 minute, turn the cutlet over, lightly salt the top and fry for about 2 minutes. Fry its sides for a few seconds, holding the piece with tongs. Turn it over again, slightly salt the other side and fry for another 1 minute or a little longer if you want the meat to be more fried (medium/well done depending on the time and thickness of the steak – remember that the meat will “cook” in the middle for a while after frying). Remove the steak from the pan and set aside for 3-5 minutes for the juices inside the meat to “settle down” a bit. Then cut the meat into strips (across the meat structure).

In the same pan, after frying the steak, quickly fry two thick slices of baguette over high heat, first from the flesh side (so that the remains of the steak sauce soak into the bread), and then from the crust side, so that they are crispy.

Brush the bottom slice with the sauce from the inside, add the fried kale, pieces of steak, caramelized onion and sauce again. Cover with the second slice and press gently.

The sandwich can be eaten both hot and cold! Perfect, nutritious and delicious provisions, even for special patrols in search of dangerous clickers …

The post was made thanks to the courtesy of Playstation Polska, which provided us with a copy of the game and a press pack.

You can order game atPSStore