The first part of The Last of Us is considered by many players and critics to be one of the best games dedicated to the Playstation console – hence the sequel from the beginning had a difficult task to meet the huge expectations of the audience. Unfortunately, in this case both the review bombing and also quite wide-ranging hate speech hit the game, which affected not only the creators themselves, but even voice actors (especially the one behind voice of Abby). I won’t dwell here on the fact that such community movements should never take place, but it’s even more painful considering the fact that The Last of Us II hasn’t deserved it. I played through the whole game (over 30 hours total) and – despite the fact that in my opinion Part II doesn’t compete with the original story from the first game – it is still one of the best games released on PS4.

The Last of Us is worth playing at least for the gameplay itself, which immensely pulled me for over 30 hours. The detailed design of the various locations is adorned with beautiful graphics, which makes visiting every scrap of the Jackson area and Seattle a pure pleasure, and the photo mode is a must in many moments. The fight is varied and dynamic, and stealth sequences demanding + we must take into account each bullet and carefully manage the resources for crafting (I played at a high level of difficulty, so on a normal it can be less tough). In addition, great animations (especially facial expressions of the main characters) and a movie feeling introduced through atmospheric cutscenes create a very coherent and rich experience.

When it comes to the story, it has some strong, memorable moments – and although it isn’t boring and pushes us forward all the time, a little bit of cliche may be felt sometimes. In my opinion this is the least successful element of the sequel, which doesn’t mean that it’s bad. And here I’ll express an unpopular opinion – I liked Abby’s story more than Ellie’s. I won’t make a spoil here, but I mainly mean the creation of characters, including those accompanying the protagonists. In some moments it’s very shallow, and at some moments it’s simply difficult to sympathize with the behavior of individual characters, because for me there is a lack of more logic and properly built foundations for it. From the very beginning of the game I felt what the game developers want to achieve with some elements, but for me it just somehow didn’t resonate properly. On the other hand, as for the game I played on the day of the premiere (courtesy of Playstation Polska), I didn’t actually see any bugs – I only once fell off the map. In addition, considering the really refined graphics, the optimization is very good and even on a regular PS4 the game works very smoothly. My final rating is 8.5/10 and it is a strong recommendation to try this game – although the end didn’t leave me with a feeling of great amazement, overall, it’s one of the best games that I’ve recently played.

Returning to the topic of location details in the game – this is where Naughty Dog keeps its high level and it can be seen even in abandoned bars and restaurants, where EVERY menu is so detailed that you can read exactly what regulars ate at these places before the outbreak. Because of this multitude of culinary details, not only on the menu, but even in posters hung on the walls, advertising specific dishes, or appliances left in the kitchens – I spent a lot of time in the photo mode throughout the game. I made over 300 screenshots – and this is really a huge number even for a game-foodie freak like me. Designers did a great job and exploration in The Last of Us Part II thanks to it took on a completely different dimension.

Some of the restaurants appear several times while visiting Seattle – one of them is the Bagel Bros chain, specializing in bagel making. Due to the fact that the epidemic has taken over the world around autumn, there are advertisements of seasonal specialties for fall on the posters of the chain stores – specifically bagels with pumpkin and nuts, banana and chocolate. As soon as I saw this poster, I already knew that I had to prepare one of these combinations. And here you go – a fully homemade recipe for bagels with caramelized banana and chocolate-nut cream. A bit time-consuming combination, but the effect will compensate the preparing hardships. I promise! 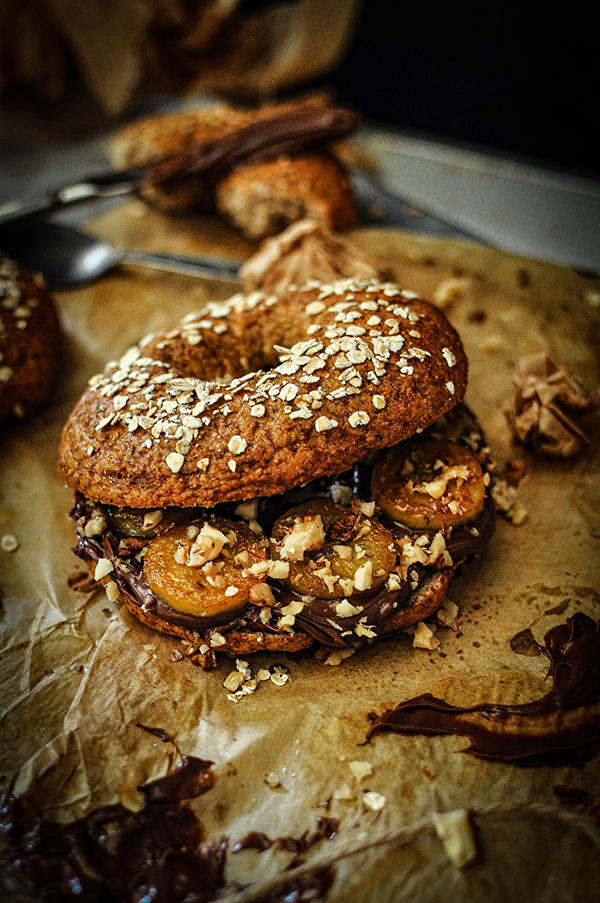 Crumble yeast and place in a bowl. Add flour, sugar and milk. Mix thoroughly. Cover with a cloth and leave for 15 minutes at room temperature. After this time, the leaven should double its volume and have bubbles on the surface.

Pour two types of flour, sugar and lukewarm water into the grout. Mix thoroughly with a fork and then knead with your hands for a few minutes until a uniform, soft consistency is obtained. If the dough sticks to your hands, sprinkle it lightly with flour. Shape the dough into a ball, sprinkle with flour on the top and cover with a cloth. Leave to rise (doubling the volume) at room temperature for 1.5 hours.

Divide the risen dough into balls (approx. 6 pcs from the given portion). Lightly flatten each ball and use your fingers to make a hole in the center – to make a bagel. Place the bagels on a baking tray lined with baking paper, cover with a cloth and leave to rise for 40 minutes.

In a pot, boil water with sugar, salt and baking soda. Throw the bagels one by one into a boiling solution, cooked on low heat. Cook for 1 min on each side, then take out and put on a baking tray. Sprinkle oat flakes on top of each bagel.

Put pre-cooked bagels in pre-heated to 200°C/392F and bake for 25 minutes until browned. Pull out and set aside to cool for a while.

Put the peeled hazelnuts and peanuts into the hot frying pan. Stirring, heat them until they start to smell and blush slightly. Remove them from the pan and when they cool slightly, peel the hazelnuts from dark skins (it does not have to be thorough, it’s just to to avoid the bitter taste)

Put still warm, toasted nuts into the food processor. Mix them for several minutes, taking breaks from time to time so as not to overheat the engine. After the first 2-3 minutes, a greasy mass should begin to form. Continue mixing until a uniform, creamy consistency is achieved.

Add chocolate and milk to the saucepan. Melt on very low heat, stirring constantly. Add sugar, cocoa and a pinch of salt. Heat and stir until the sugar dissolves. Set off the heat and set aside to cool for a while, then add ground nuts and mix thoroughly. Sweeten with sugar or honey if needed.

Melt sugar in a pan and add banana chopped into thick slices. Add butter and fry for 1-2 minutes on each side until the banana is golden brown. Immediately proceed to serving the bagel while the banana is still warm.

Cut warm bagel in half, spread generously with chocolate cream from the inside, put slices of caramelized banana on it and sprinkle with chopped nuts. Eat with freshly brewed coffee. Here is a seasonal bagel from Bagel Bros at its best – on an exclusive post-apocalyptic dish! 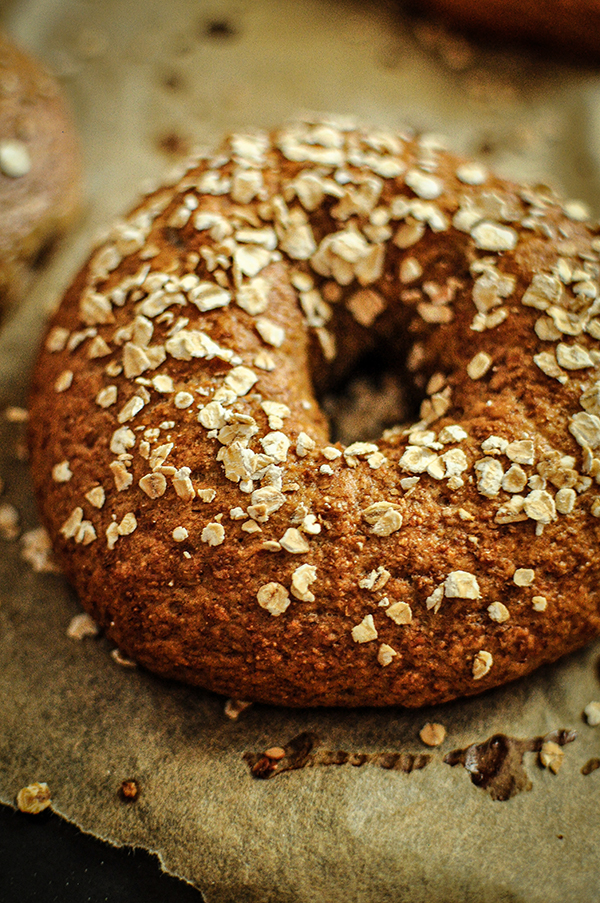 This post was made thanks to the courtesy of Playstation Polska, which provided us with a copy of the game and press pack.

The game can be ordered, among others on PSStore