1968, New Bordeaux modeled on New Orleans, Vietnam war veteran Lincoln Clay in the lead role, settlements between criminal organizations, loss of “family”, desire for revenge, and the return of the familiar Vito Scalleta from the previous part of the series – this is just an introduction to this what is to be offered by the new, third installment of the legendary Mafia franchise. 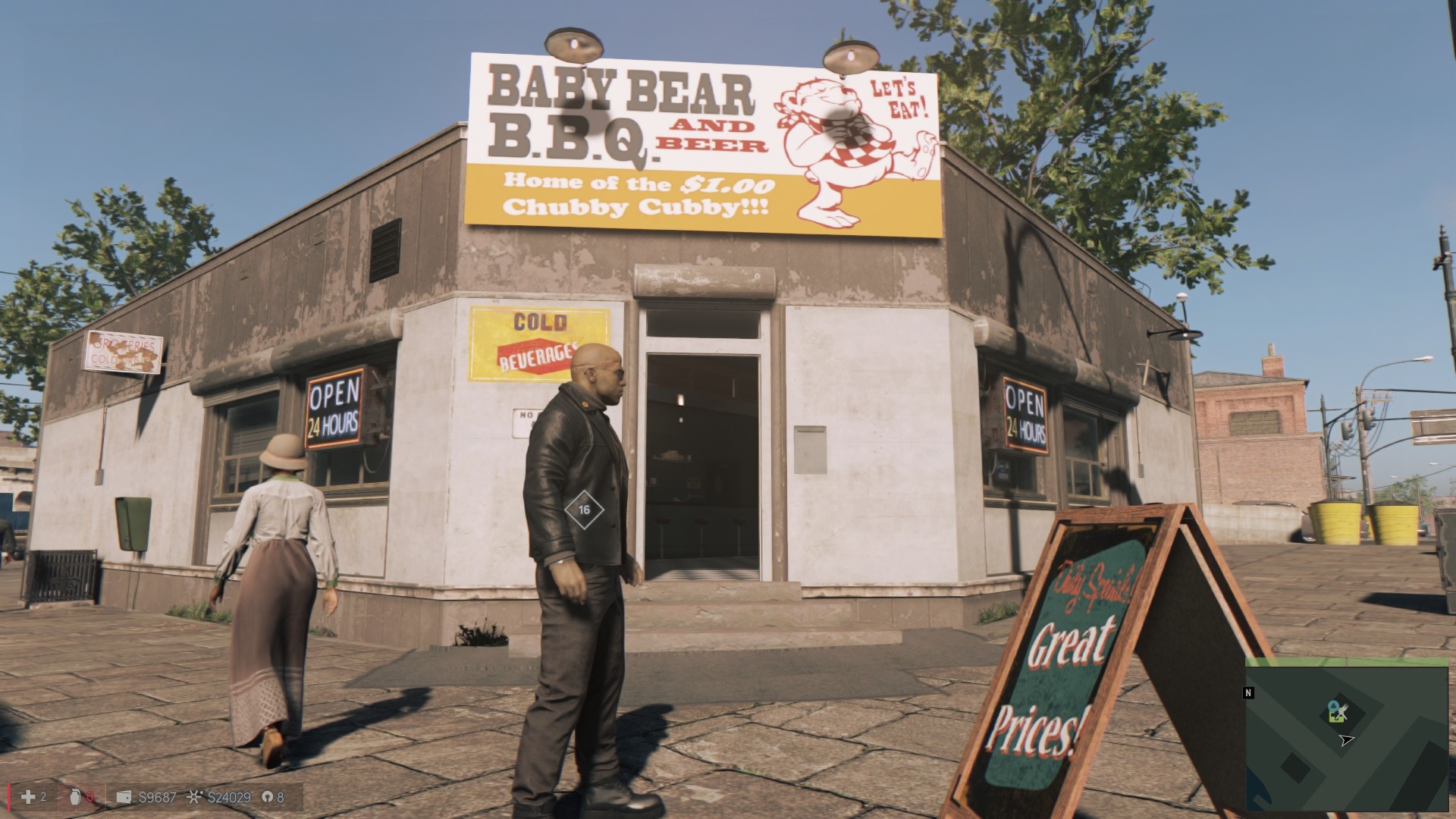 While waiting for the premiere, we decided to take a look at the culinary traditions of the New Orleans (or rather Bordeaux) area – finally we will spend some time there as Lincoln. The state cuisine is divided into two main trends – Cajun and Creole. The first one comes from poorer areas and is characterized by the use of simple and nutritious ingredients (rice, vegetables, meat and shellfish), as well as a spicy taste. In turn, the Creole style has already developed in New Orleans itself and is considered to be more refined, it also has the hallmarks of Western European cuisine. These styles intertwine with each other, creating a real fair of delicious dishes and various flavors.

Among the most famous typical dishes of Louisiana cuisine is gumbo – a type of thickened soup with vegetables and meat or seafood, which appeared in the game, served by Lincoln himself to the inhabitants of a poor district. The making of a gumbo varies depending on the terrain, but the dish has some permanent elements. 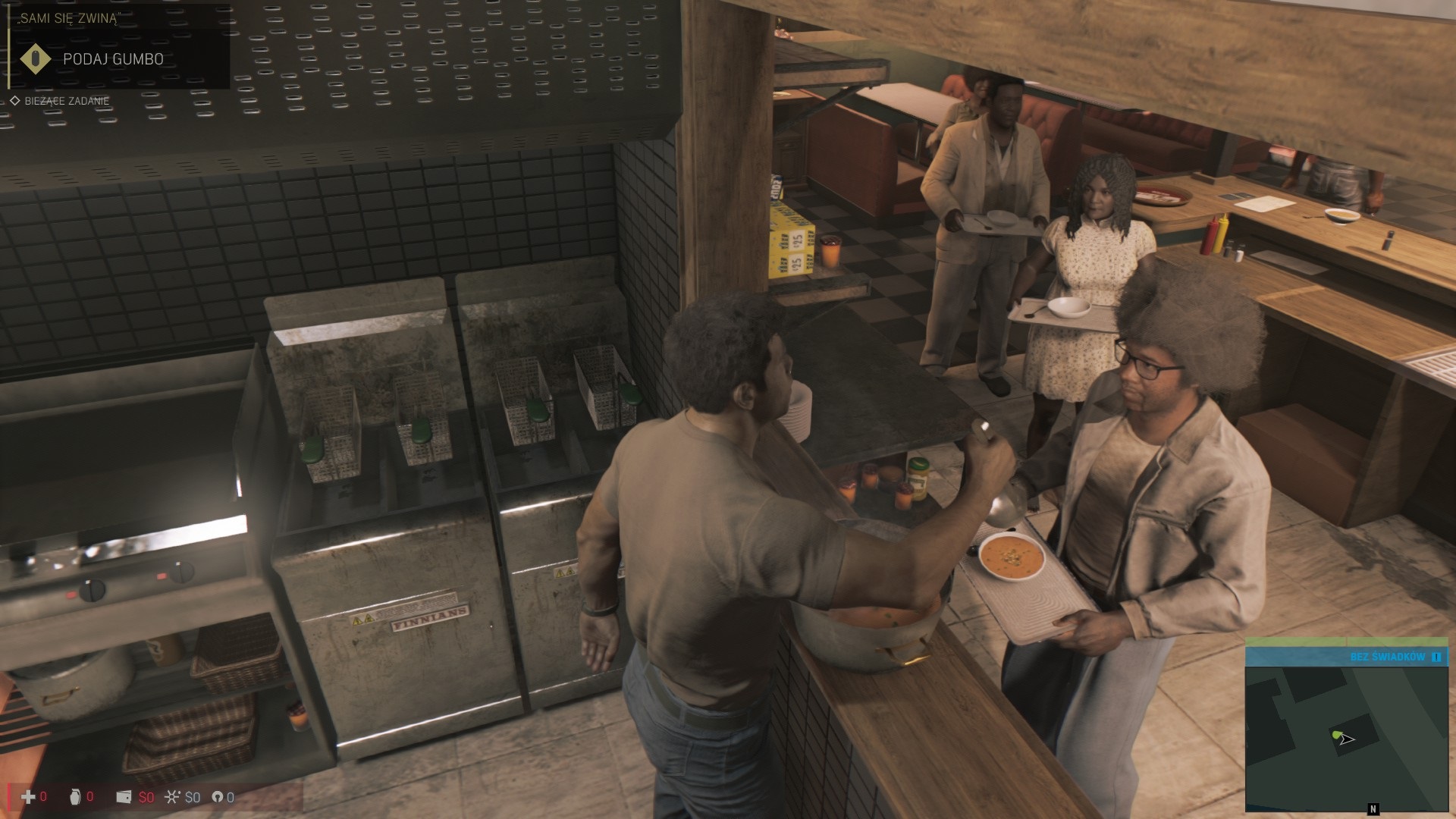 First, the gumbo must be thick. The very name of the dish most likely comes from okra, a vegetable whose name in Banto is ( ki gnombo ) [ Wikipedia]. Okra has some kind of “slime” that thickens dishes and is often used in different varieties of gumbo. The basic thickener is also the roux, which gives the dish an original flavor and dark color. Another famous thickener is also the so-called gumbo file made from sassafras leaves. In fact, in Polish conditions, it is enough to rely on the roux and the gumbo will also turn out delicious.

Secondly, gumbo is characterized by the use of the traditional “Trinity” of vegetables, ie green peppers, celery and onions; as well as cajun spices (mixtures of black pepper, cayenne, sweet pepper, garlic and herbs such as oregano and thyme). It is also worth taking care of a good broth – in the USA it is easy to buy ready-made canned, in Poland, unfortunately, you either have to cook it yourself (which significantly extends the time of making gumbo) or, if necessary, use ready-made bouillon concetrate (but without flavor enhancers). As part of our tests, we tried to cook gumbo using only water and it was also very tasty. 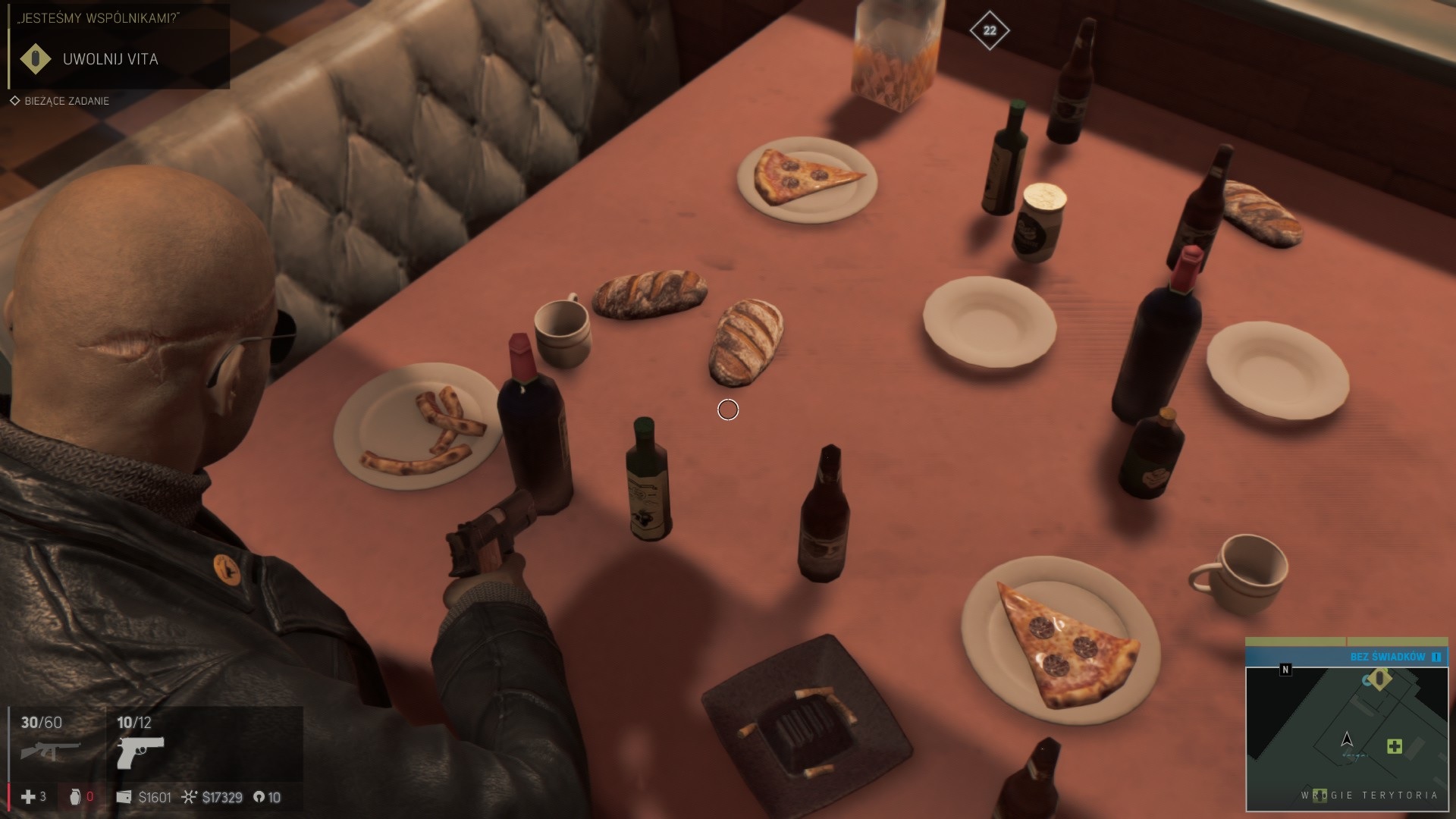 Another essential ingredient in gumbo is meat and / or shellfish. According to the Cajun people, poultry and shellfish should not be mixed in one version, but the people of Orleans have a different opinion and are happy to combine sausage and seafood in one pot. We decided to use only poultry and sausage – in the original, use sausage of French origin, Andouille, but Polish, good-quality and heavily smoked sausage is a perfect substitute (just remember that the meat content should be large, preferably at least 95% meat used for production). 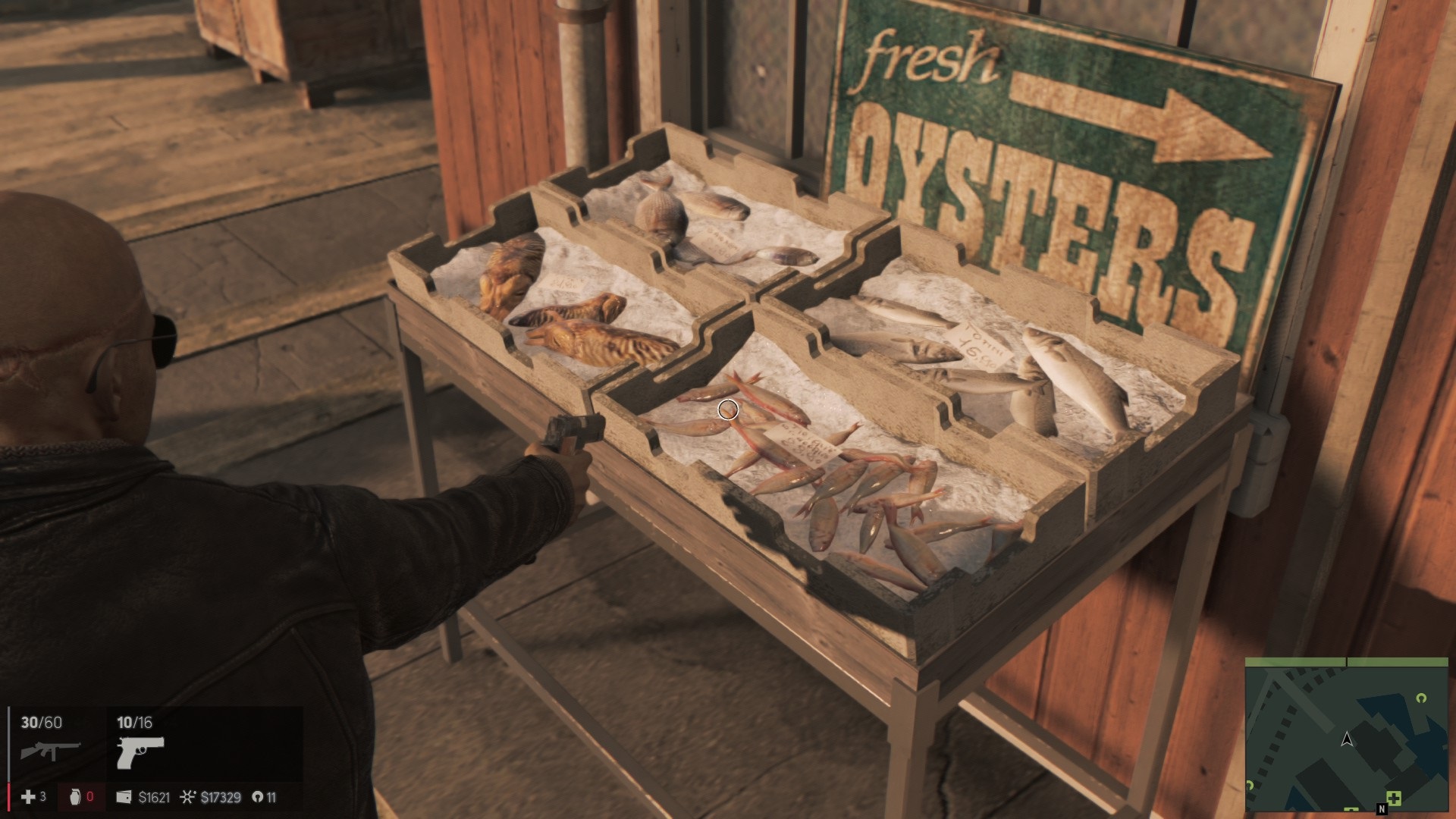 Gumbo is not really a difficult dish and only requires a little patience with a fry. It may seem like a variation on Polish stew, but its taste is something completely new. We sincerely recommend it, because we were delighted with the final effect.

There is no better way to start your New Bordeaux adventure than with a plate of aromatic, full of flavor, hot gumbo! 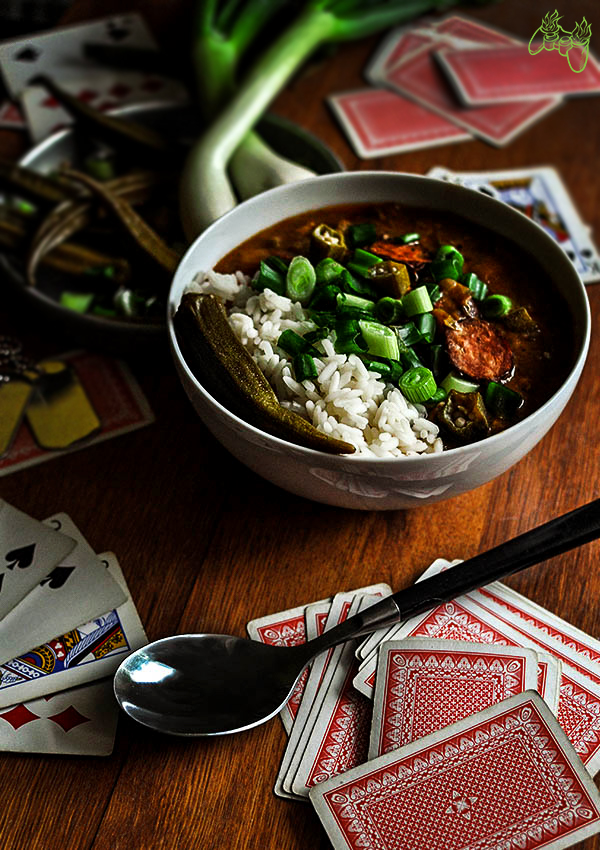 Start by cutting vegetables and meat. This will significantly improve work in the following points. Clean the celery of leaves and sand.

Cut peppers, onions and celery stalks (i.e. Trinity according to New Orleans cuisine) into cubes and put into a separate bowl. 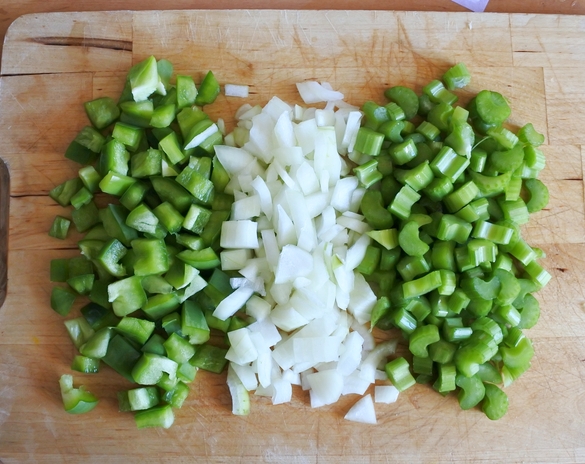 Cut the sausage into slices and the chicken into thicker cubes. Peel the tomato and dice it.

This is a key stage in the gumbo preparation that takes patience, but then things will get easier. You only need to focus on this activity, as the roux is easy to burn. It is best to prepare it in a pot with a thick bottom that distributes the heat evenly.

Pour the oil into the pot and pour the flour. Whisk thoroughly so as to completely distribute the flour in the oil. Then set the burner on medium power and heat the mixture, stirring from time to time, until it starts to bubble a little. 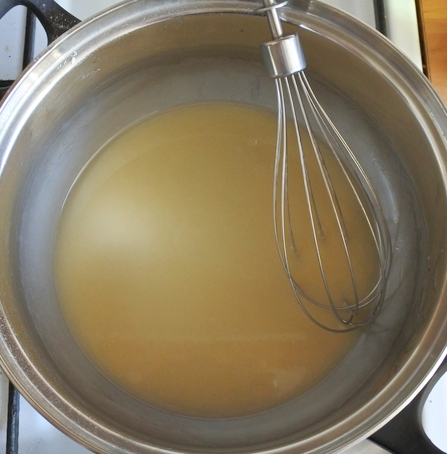 Reduce the gas to a minimum and fry the mixture, stirring very often. Stirring is very important as all you need is a moment of inattention and the roux will burn and this will mean you will have to repeat the process with a new batch.

The color will begin to become more intense over time – the point is to obtain at least the color of milk chocolate. You can try to fry the flour to a darker color, but the equivalent of milk chocolate is fine (see photo).

Add chopped paprika, onion and celery to the milk-chocolate roux and mix – it will hiss a lot and the color will darken even more, that’s how it should be. Fry the mixture over medium heat for 5-8 minutes, stirring frequently. 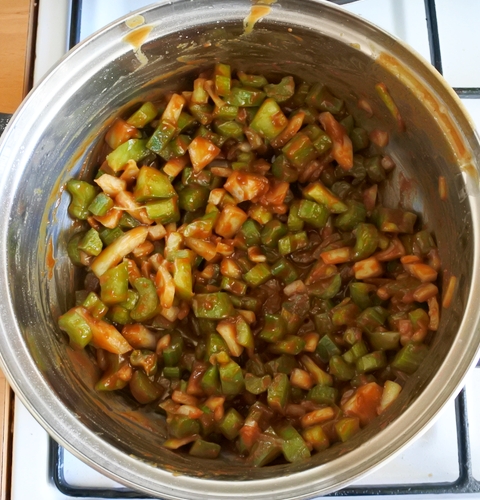 Fry the chopped sausage without fat over medium heat, until it is golden brown. 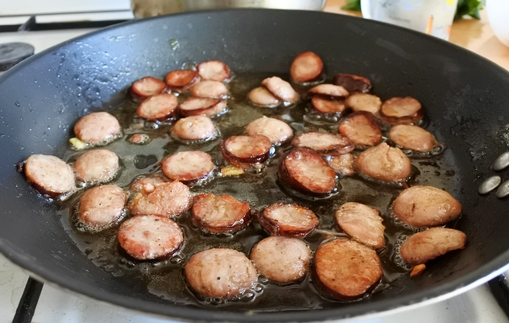 Slowly pour hot broth or water into the pot with roux and vegetables (soup without real broth will lose a little bit, but not so much that you cannot skip it), stirring constantly. Then add chopped tomato, fried sausage (it can also be half of the fat that has melted from it, but if you don’t want a fatty soup, you can skip it), chopped chicken breast, crushed garlic, sweet paprika, black pepper, cayenne and chili flakes (add as much as you like), oregano, 1 teaspoon of salt and bay leaf. Stir everything and stew it for about 40 minutes, stirring from time to time and adding broth or water if the soup is too thick. 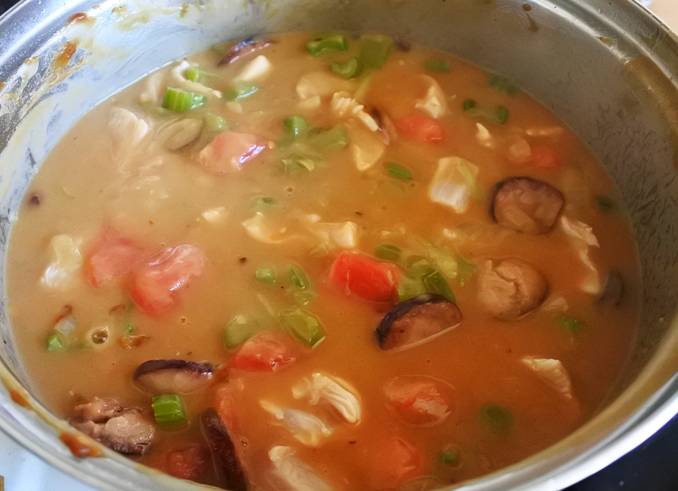 Boil the rice in a bag (it’s easier), or in the traditional way, i.e. sticking to the rule: 1 cup of rice for 2 cups of boiling water + a little salt. Mix the water with the rice and simmer for 15-20 minutes, stirring frequently. Then let the rice rest for 5 minutes to allow it to absorb any remaining water.

This ingredient can be omitted, because we know that its availability is difficult, but if you live near an oriental food store, we encourage you to buy canned okra, because it is an ingredient that gives the dish not only additional density, but also a characteristic taste. Drain the okra from the brine, rinse with water and cut into thick slices. Add to the pot with the soup and stew it for 8 more minutes. 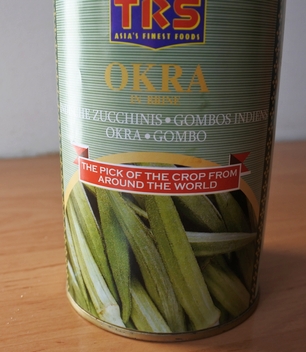 Try the cooked gumbo – if necessary, add a little more spices and salt.

Pour hot soup into bowls, sprinkle with chopped spring onions and serve with a little rice. 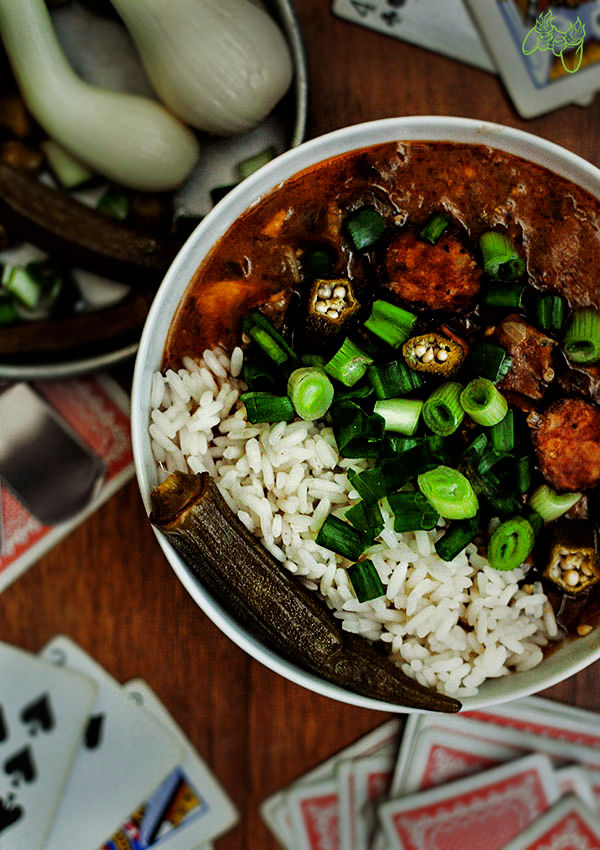 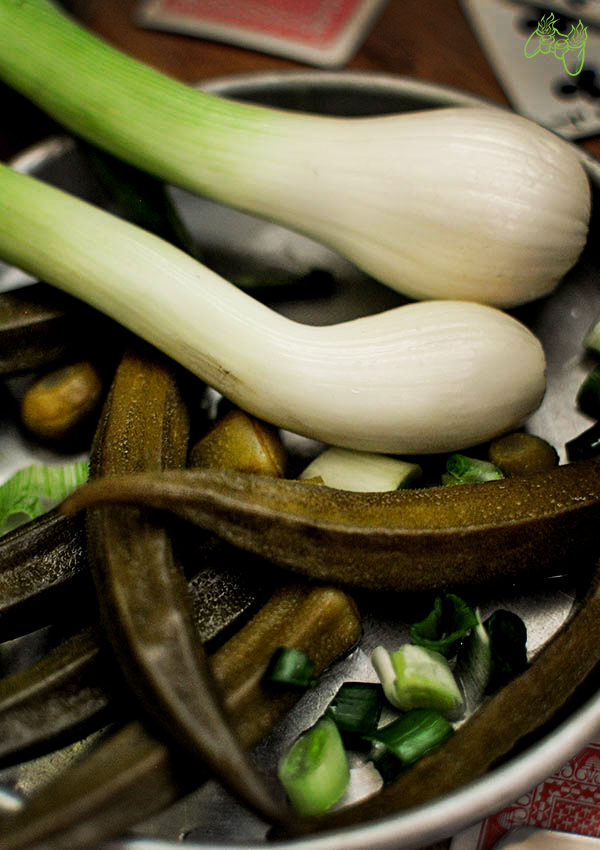 This post was created thanks to the courtesy of Cenega, which is the game publisher in Poland.