If I were to mention the top list of games in which culinary motifs were treated with closer attention, then Final Fantasy XV would definitely be the leader. Not only the dishes in the game look so appetizing that you would like to eat your screen, but they are also accompanied by interesting mechanics related to the skill of cooking one of our companions (named Ignis). In short – the hero can prepare a meal for our entire team while in the shelter/at the campsite, while he learns new recipes when buying dishes in restaurants, watching NPCs eating, acquiring new products, watching food signs and posters, as well as by raising the level cooking skills. Even fans caught up with Ignis’s saying during the “invention” of the new recipe: “That’s it! I’ve come up with a new recipe! “

Each meal gives different buffs, and the heroes of our team have their favorite dishes, so it’s worth cooking to their tastes. As you can see, food-related mechanics have been taken very seriously and have many components there. In the next entry with another recipe from this game I will deal with their in-depth analysis – so as not to immediately give you too much information at once, because the game really contains a lot of elements related to cooking.

Here, however, I would like to draw attention to the fact that the food here is so well illustrated because the game developers, before moving the dishes to the game in 3D form… cooked them themselves. In fact, the creation of dishes began in the art department, where the ingredients and appearance were planned. Then part of the development team cooked them during the camping, in the so-called field conditions to reproduce the same conditions that will prevail during the game. Ready meals were photographed at various angles and scanned, and then passed to 3D asset magicians. Of course, the dishes also underwent a taste test. You can read more about how the dishes were developed in the game here in English.

What’s more, numerous dishes in the game represent a different culture of each city or region visited, in this way we can find simple eateries in the middle of the city, as well as exclusive restaurants located in a picturesque bay, where dishes are horrendously expensive. Each pub has its own original decor as well as a characteristic menu. As for me, a real masterpiece when it comes to refining the details, really, hats off. You probably guessed that for most of the game I walked around the premises and watched how they were made, as well as what dishes were matched to them. Well, I can’t help it, that’s my passion!

There is also something for fishing enthusiasts – Noctis has the option of fishing, and caught fishes can later be used in a pan or pot. In this post I will show you a recipe for a simple but delicious teriyaki fish, according to the game – Nebula Salmon Teriyaki. To make it according to the recipe, you need to get two ingredients: Nebula Salmon Fillet and Hulldagh Nutmeg. Let’s say that in real life we ​​will replace it with ordinary Norwegian salmon and nutmeg. We’ve added homemade teriyaki marinade with a sweet and sour aftertaste, which takes on a smoky aroma after grilling. Wonder on the stick, literally! I recommend it even to those who look at fish with aversion – maybe this is your chance to change your preferences. Our photographer was overjoyed after tasting, although usually when she hears ‘fish’ she says – no, I won’t eat it! A good recipe can do everything, my dear readers! 🙂 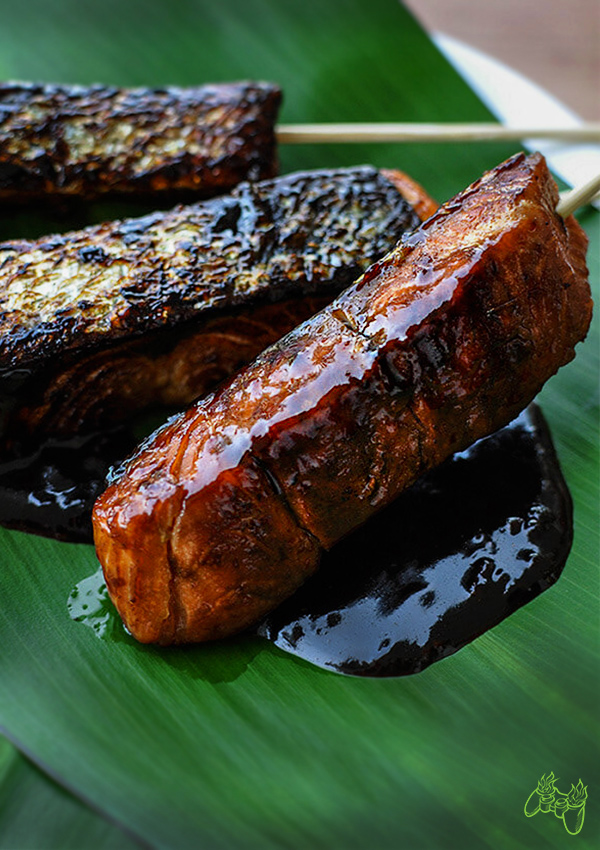 In a saucepan, mix all the marinade ingredients (peel ginger and garlic and grind on the smallest grater mesh), cook on medium heat, bring to a boil and put away from heat, cool.

Wash the fish under running water, dry it with a paper towel, cut it crosswise into 4-5cm wide strips and check with your hand whether the fillet has any bones left. Place the prepared pieces of fish in a cooled marinade, mix and leave in the fridge for 20 minutes.

Pull the fish out of the fridge half an hour before frying. Warm up the grill pan and place on it pieces of fish drained from the marinade, skin down. Fry for 3-4 minutes on one side, until the skin is browned, then turn and fry for another 3-4 minutes. Remove chunks of fish from the pan and place each one on separate sticks. Pour the remaining marinade into the pan and cook it for a moment, until it has a density of liquid honey. Transfer it to a small bowl and use it as a dipping sauce. You can also grill the fish.

Take sticks in your hands and enojy the company of your friends with this delicious food. After eating, the meal gives the following effects: 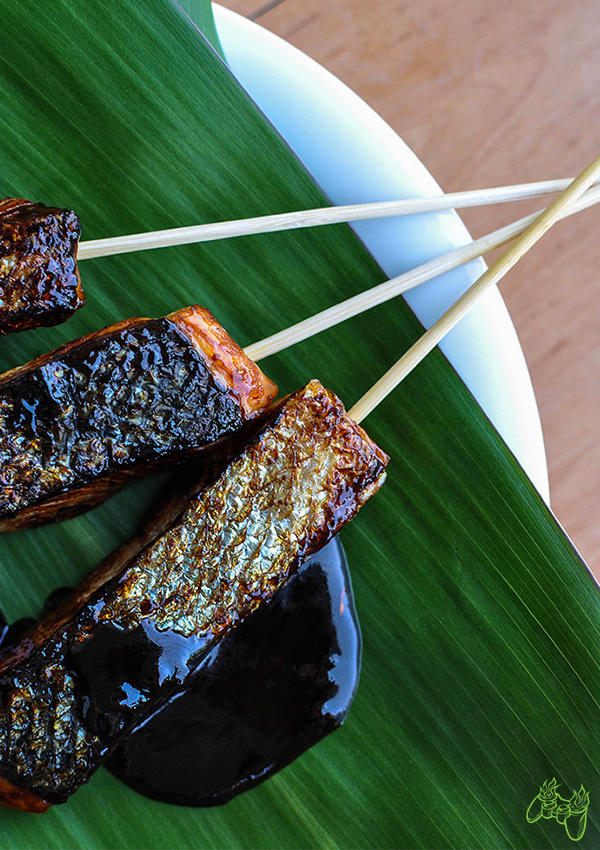