Grand Theft Auto is a great example of a masterful parody of American society’s weakness for all kinds of junk food. Therefore, the games in the series could not miss the dish, which is the most-known representative of this trend – burgers ofc! The chain serving this delicacy in the GTA universe is Burger Shot, which, like Cluckin ‘Bell referring to real restaurants serving fried chicken, is a satire of well-known burger networks.

Already in Vice City, the player can replenish the hero’s life by dining in the burger house. In San Andreas, the menu selection is increased to 4 items: Moo Kids Meal, Beef Tower, Meat Stack and salads. Each dish has a fat indicator and affects CJ’s condition (more about this mechanics is described in our recipe for Chilli Dogs). In GTA IV, on the other hand, the player can only buy The Bleeder burger for $1, despite the fact that the menu also includes items such as Money Shot Meal, Torpedo Meal and Heart Stopper. In addition, the main character, Niko Bellic, can take a girl or friend to one of the burgers – such pleasure, however, costs him as much as $100. Unfortunately, in GTA V Burger Shot restaurants are definitely less prevalent and they are not available for a player to dine in.

Going back to GTA IV and the local menu topic, the most prominent proposition is the mentioned Heart Stopper. This is a huge burger, consisting of as many as seven beef patties, and as the advertisement claims, it has as much as 6 pounds of meat and cheese (i.e. about 2.7 kg)! The spot, which we can watch in the game after turning on the TV, refers to the name of the burger. It shows one of Burger Shot’s customers calling for an ambulance, who claims that his heart stopped after eating this giant burger. Also on posters presenting Heart Stopper, the network warns that a burger can kill, for which it is not going to take responsibility …

Therefore, the following recipe is dedicated only to real tough guys who can easily handle such a dose of meat and cholesterol! Our version is a bit lighter – it contains 7 patties, but only 900g of meat instead of over 2.5kg. This time it’s not really healthy, but veeeery tasty dish – with toppings and delicious sauce of our authorship is a feast that you will remember for a long time. Well, unless Heart Stopper confirms its shameful opinion … Will you take this tasty risk? 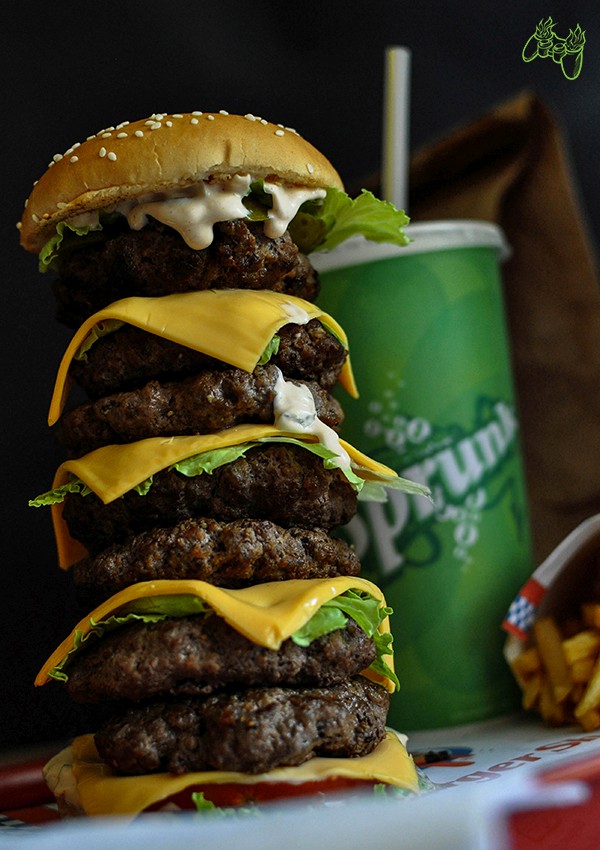 Cut cucumbers and onions into small cubes, add the rest of the ingredients and mix thoroughly. If the consistency is too thick, you can add a little milk. Put the sauce in the fridge for at least half an hour.

It’s best to buy beef from the butcher and grind it there – you will be advised with a suitable piece for burger (it can also be a mixture of different pieces, e.g. entrecote, shoulder or leg – it is important that the meat has some fat, so it is not too dry).

Take the meat out of the fridge half an hour before frying. Put it into a bowl and mix it for a while with our hands. Then divide into 7 equal portions (125g each) and form balls. Flatten each ball with hands and form equal paties, about 1-1.5 cm thick. In the center of each disc make a round hole – it will allow to keep patties evenly thick during frying. Place the formed pattieson a board and season with salt and freshly ground pepper only on the upper side.

Heat the pan with a non-stick coating strongly and put on one batch of burgers with the spiced side to the surface of the pan – the patties should not touch each other. Fry them over medium heat for 3 minutes, at the end season with the salt and freshly ground pepper from the top side, and turn over. Fry burgers for another 3 minutes, they should be nicely browned. If you like burgers well done, fry them on each side after a minute. Put fried patties on a plate and give them a “rest” for a minute.

We devour the whole burger while it’s still hot. In the middle of the feast you can start calling for help, cause another action is being planned with cardiac arrest. Anyway, we cannot be held responsible for it… 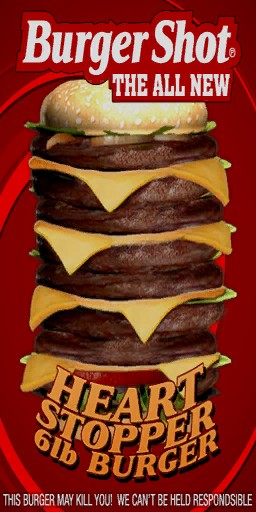