Gothic is a game that was on of my favourite during my teenagehood – probably most of the older players perfectly remember the great atmosphere and very special texts in the Polish version of dubbing (as well as stiff combat mechanics xD). I know those who didn’t really like this series, but I still remember all the adventures of the Nameless – a story like in Gothic 1, 2 and Night of the Raven it’s very hard to find among most of contemporary productions. Therefore, despite many years on its back, it is worth giving this production a chance even today. I strongly encourage you to play it!

When I think about Gothic from the perspective of food, I immediately get a special goulash in my mind, which was a reward for completing several additional missions in official DLC to Gothic II, called Night of the Raven (released in 2003). Its author was Thekla, a cook on the Onar’s farm, who made food for mercenaries. Each serving of Thekla’s goulash gave as 1 point of strength for our character, and in the game we had the opportunity to get it only 5 times. Due to the lack of mention about its ingredients (all we know is that Thekla sends us only once for a packet of herbs), I tried to choose the ingredients so that most of them had a chance to appear in the Gothic’s universe. I chose pork meat (there were sheep on the Onar’s farm, so you can exchange pork for lamb – but in Poland we have limited access to this kind of meat), kvass (or alternatively dark beer) and honey – aren’t these the exact ingredients that are able to give strength to any warrior?

This recipe is so simple and universal that I use it very often in camping conditions, in a cauldron, during offline trips with friends from PGG (Poznań’s Gamers’ Guild) – we usually cook it with approx. 3.5 kg of meat, so even this amount of goulash doesn’t cause any problems with cooking. I also recommend this recipe for such feats – and beacause that this is one of your favorite recipes, we have refreshed the photos for a better visualization 🙂 Remember to lick the pot to the last drop! 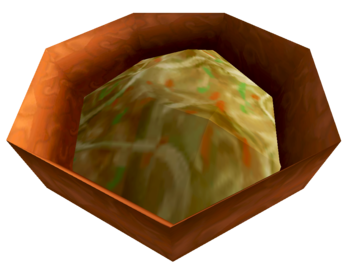 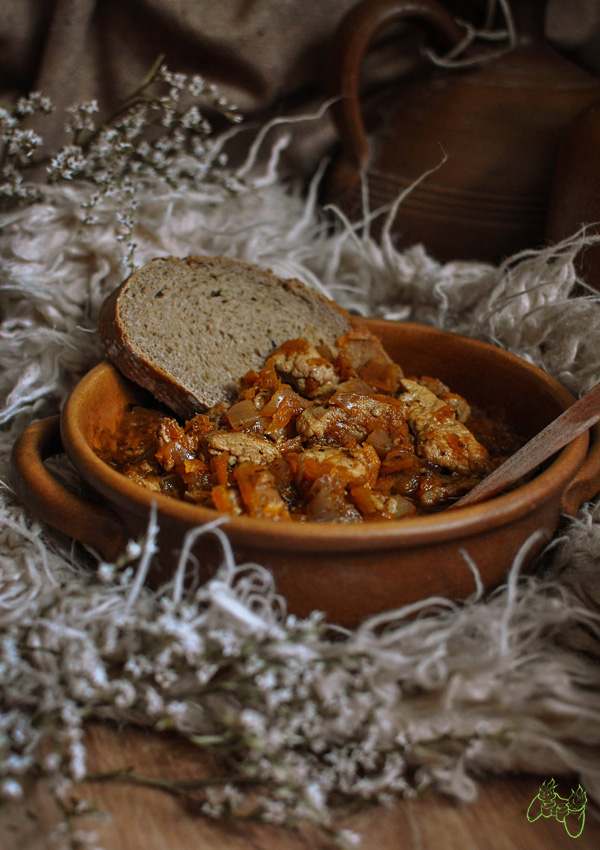 Cut the meat into cubes (it is also worth to hit them lightly with a fist, then the meat will be more delicate), sprinkle with fresh pepper and put in a pot with hot oil and cook on a strong fire about 3-4 min, stirring from time to time. Then transfer the meat into a bowl.

Wash the carrot, peel and grate or cut into slices. Then throw it into the same pot with a spoon of spoon and fry on medium heat for about 2 minutes, stirring, until slightly golden color. Place the fried carrot into a separate bowl.

Chop onions. Fry it over medium heat with one tablespoon of oil in a pot for about 3 minutes, then add the finely chopped garlic and fry for about 1 minute, stirring. 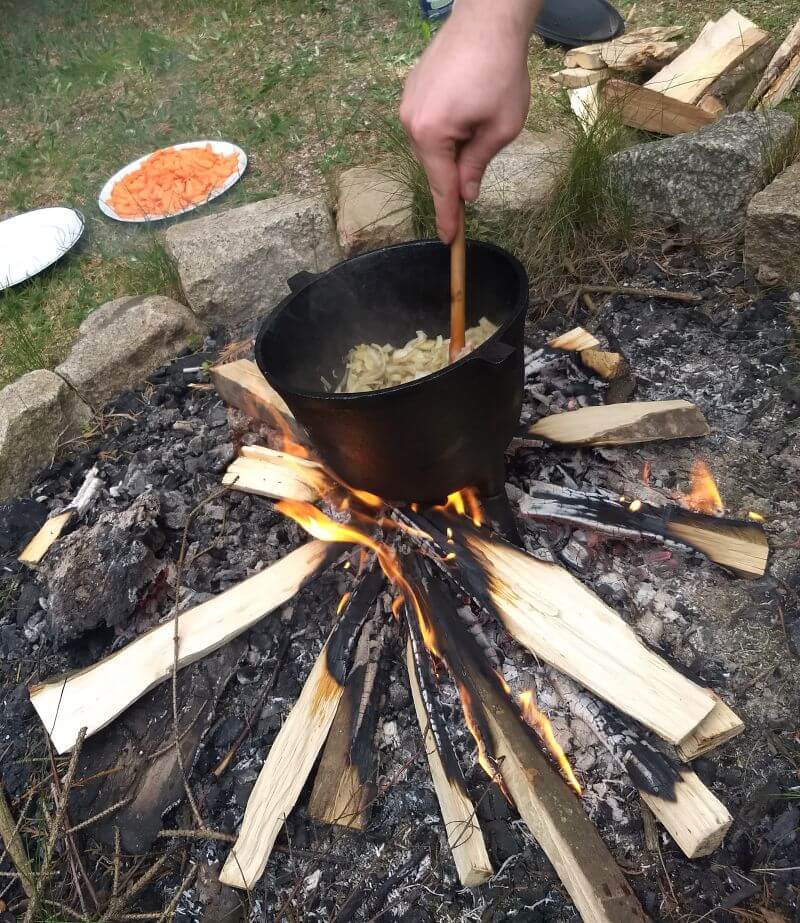 hen throw the fried carrots from the bowl and the sweet pepper. Mix and cook it for another 2 minutes. Then leave half of the vegetables in a pot, and save half of them in a bowl for later. 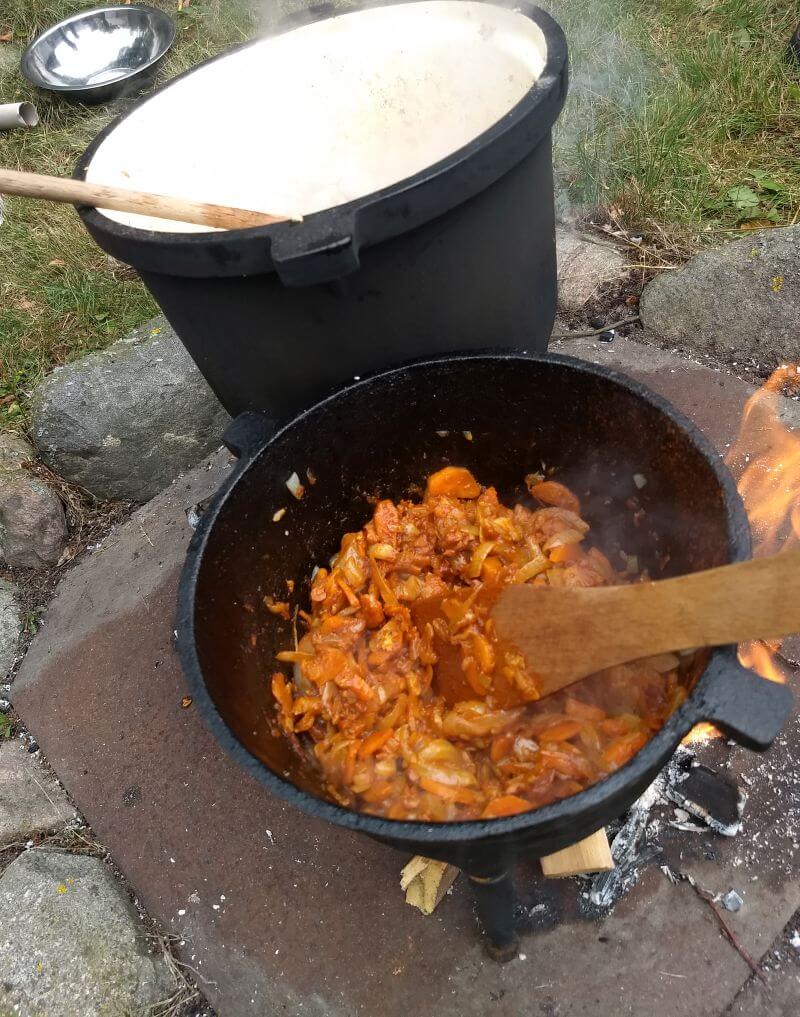 Add kvass, or a dark, sweet beer to the pot (make sure that the liquid is already warmed – cold liquid could harden the meat), add honey, marjoram (and other favorite herbs), and stew it uncovered, on medium heat, for about 30 min (or longer – depending on the size of pieces of meat) until most of the water evaporates and the meat is soft, and the stew thickens and acquires a dark brown color. At the end, add slat and the rest of the vegetables from the bowl.

According to us, it is better to add cream after pouring goulash on the plates. However, you can also mix it with the goulash already in the pot – turn off the burner, mix the cream in a mug with a bit of goulash and pour slowly into the pot, stirring, try and season more it if necessary.

Goulash tastes great with yeast buns or rustic bread. After pouring into the bowls, add the chopped parsley. Goulash will give you a strength boost for the whole day and you do not have to do tasks from Thekla to eat it! It is so tasty that we guarantee that you will want to lick the pot, just like the Nameless one from Gothic.