The need for life replenishing after shooting events in the GTA is a main cause of often visits in the locations, which are serving food typical for American culture. Burgers, hot dogs and greasy chicken pieces are a great fuel for our hero before next ordinary street robbery or a fight. One of the main fast food chains in the universe is Cluckin ‘Bell, where according to the slogan, you can taste deep-fried delicacies (“Taste the cock!” – reference is intentional). This food chain is a kind of parody of real fast-food companies that we can find in America.

According to the advertising website , thanks to this company, since 1982, chickens have been provided a way to a happy place of eternal rest – that is, the stomach of customers. The creators of the game made a lot of humorous and quite direct references to the infamous practices of real-life fast food chains. They appear not only in the form of mocking advertising slogans placed on posters (eg about 200% larger chicken breasts in one of the sandwiches – an allusion to stuffing chicken with hormones) or song lyrics that we can hear on the radio in the San Andreas part, but also in what the employees say – and they mention, among other things, the possibility of finding feathers in the ordered meal or choking on the remains of bones. What’s more, you can still visit a real website (www.cluckinbellhappychicken.com/) created by the game developers, where you can listen to the mentioned song, review the menu or read the basic information related to the activity of the chain. 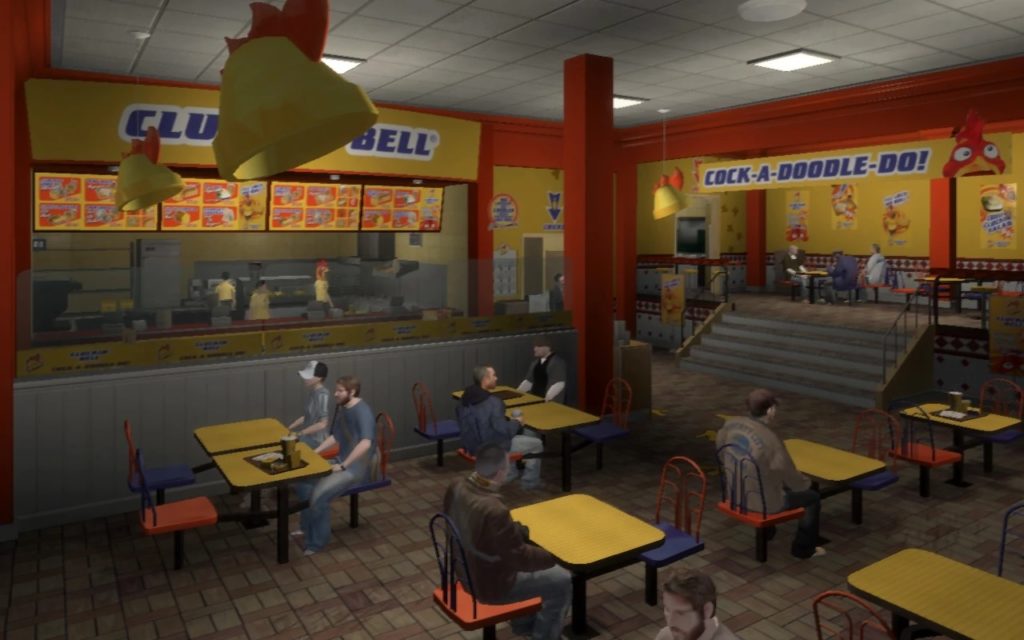 Cluckin’ Bell restaurants can be visited in San Andreas and GTA IV, in part V there is no such possibility, although there is a factory, warehouse and farm belonging to this company. In San Andreas, the Cluckin’ Bell menu consists of 4 items – three of them are “clucking” sets of various sizes and influence on the main character’s “fat” statistics (1, 2 and 3%, respectively), and the fourth set is a salad with zero effect on CJ fat level. In turn, in the GTA IV the menu is more diverse (it has 8 items), but the hero can only buy Fowl Burger, which after eating completely renews the level of health. Other items shown on the menu include chicken wings, children’s sets, vegetarian meal, as well as the Balls & Rings snack, which I want to introduce to you in this recipe.

The Balls & Rings snack in the menu is presented as a set of two boxes with a network logo – one of them is filled with balls (probably from a chicken) and the other with onion rings. In the following recipe I propose a slightly less unhealthy version without chemical additives, than the one that could be served in Cluckin’ Bell. Chicken balls are a simple combination of shredded meat from chicken breasts and spices and breadcrumbs based on cornflakes. On the other hand, onion rings surprise you with crunchiness, and spicy taste. Beer dough make them a feast for the palate! For this I recommend to prepare homemade BBQ sauce, which fits well with these snacks. If you love fast food rarities, then this home version is a great idea for a feast with no major remorse. It is worth remembering that the network is not responsible for any damage to health after consuming their products 😉 So it’s time to get a snack from Cluckin ‘Bell! As Cluckin ‘Bell employees say: “Enjoy-a-doodle-doo!” 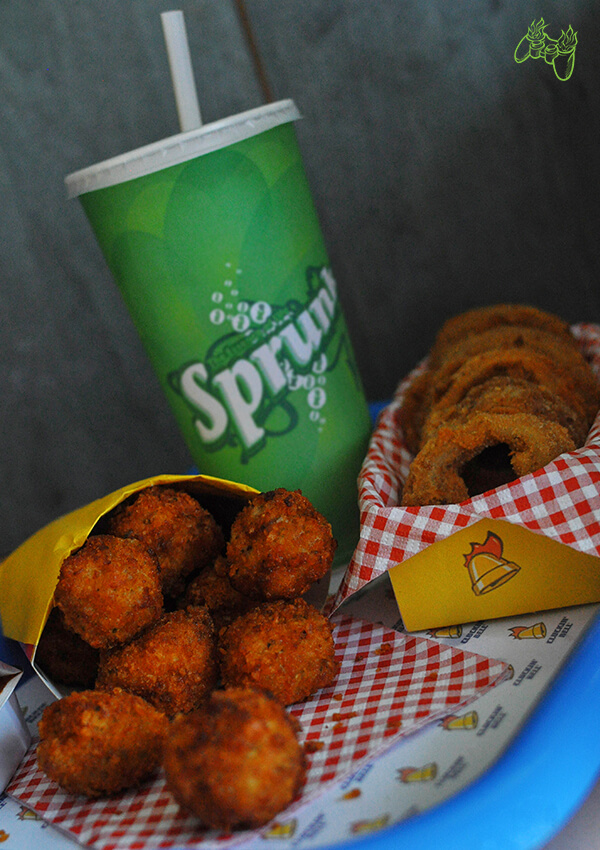 Get rid of any unwanted pieces from the chicken breast and finely chop it (or just grind) to get consistency of a minced meat. Then put into a bowl, add the spices, crushed garlic, dried parsley (or very finely chopped fresh one) and grated cheese. Mix all thoroughly.

Crush corn flakes into small pieces (eg. by spreading them on the work surface and rolling them out through a clean cloth), so as to produce fine breadcrumbs.
Use the meat mix to form small balls of a diameter of approx. 3-4cm and carefully toss them in crushed flakes.

Pour some rapeseed oil into a deep saucepan (so it at least cover the balls) and heat it up. To check if temperature is right, throw in a cube of bread (if it’s nicely fried after 1 minute, then you can start throwing chicken balls in). Do not put too many balls at once, because it might lower the temperature and oil will soak into the balls. Frying takes approx. 4 minutes and you should turn the balls a few times to evenly fry them on each side (because of cheese inside, balls can easily cling to the bottom at the beginning, so it’s good to mix them just 30 seconds after being thrown into the oil). Toss already fried balls on a sheet of paper kitchen towel, it will soak in the excess fat.

Cut a large onion into thick slices and gently separate rings from each other with your fingers.
Mix the flour in a bowl with the spices, then toss each ring into it (this will allow for better handling of the dough). Set aside.

Pour ice-cold beer (preferably a lager type) into a bowl with the flour and mix (the recipe needs only a bit of beer, so you know what to do with the rest in a bottle:D). The dough should have a thick consistency, about 2 times thicker than for pancakes (more like sour cream). Add the breadcrumbs to the second bowl. Dip rings in batter and then move them to the bread crumbs, battering them by shaking the bowl (so the dough does not fall from the rings).

Move the battered rings cautiously with a fork into a saucepan with hot oil (the same principle as in the case of balls, see left). At the beginning rings will fall to the bottom, but soon they will float to the surface. They should fry for approx. 3 minutes to light-golden color (turn them over once during the process). Put fried rings on a sheet of paper kitchen towel to drain excess fat. 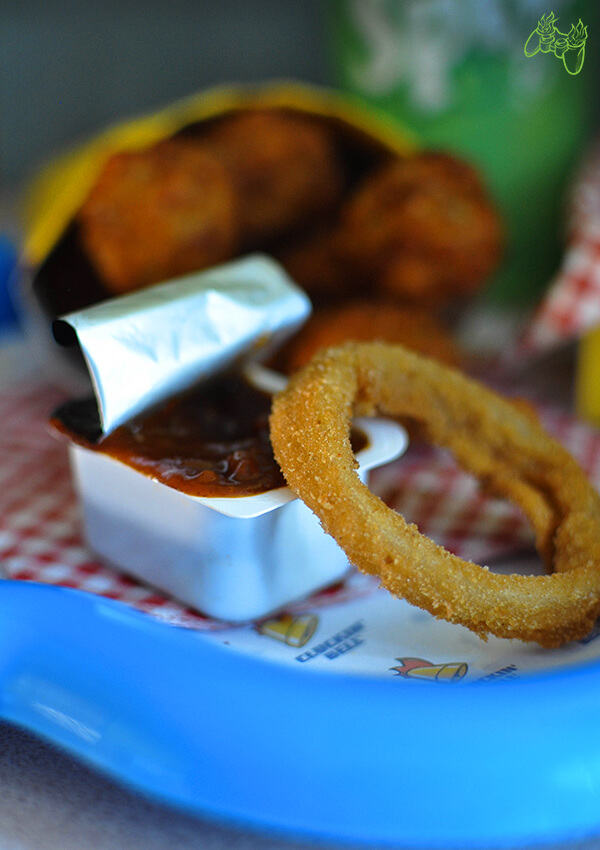 Cut the onion into very small cubes and throw it in a saucepan with hot oil. Sprinkle it with a pinch of salt and fry it over low heat until for 2 minutes. Then add the ground sweet and smoked paprika, mix and fry for one minute.

Add sugar and honey to the saucepan, mix thoroughly. Caramelize for about 1-2 minutes, stirring frequently. At the end, add the chopped garlic, stir again and fry for no more than 30 seconds.

Add the Worcester sauce, soy sauce, mustard, ketchup, pepper and beer to the saucepan. Stir well and cook on low heat until most of the liquid evaporates and the sauce becomes very thick and sticky. Then remove the saucepan from the fire and leave to cool. If necessary, the sauce can be slightly salted.

Chicken balls and onion rings should be consumed immediately after frying, but thanks to proper batter they retain crispness even when reheated.
It is worth remembering that when ordering in Cluckin’ Bell employees can inform you about the possibility of finding feathers or bones in the meal. The fast food chain does not take any responsibility for any damage to health after consumption. Well, it’s time for Cluckin’ Bell! 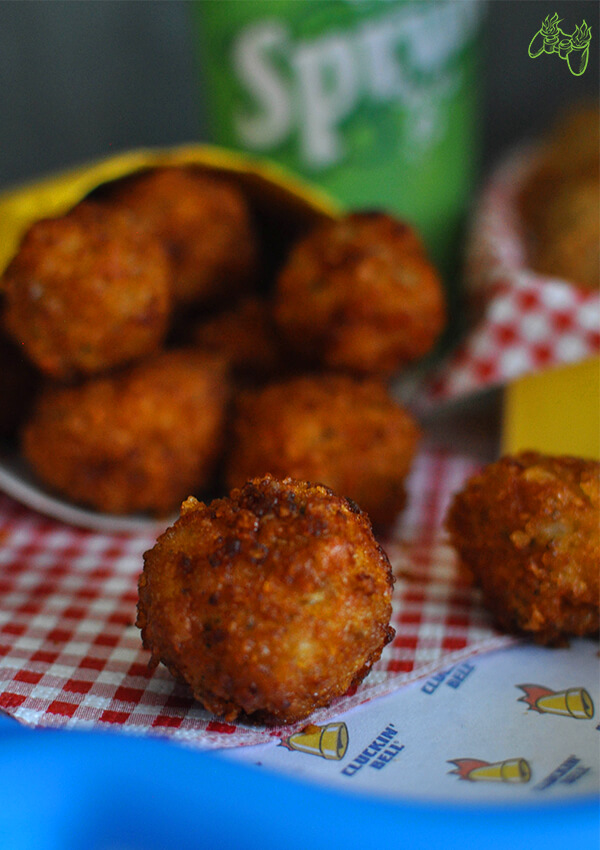 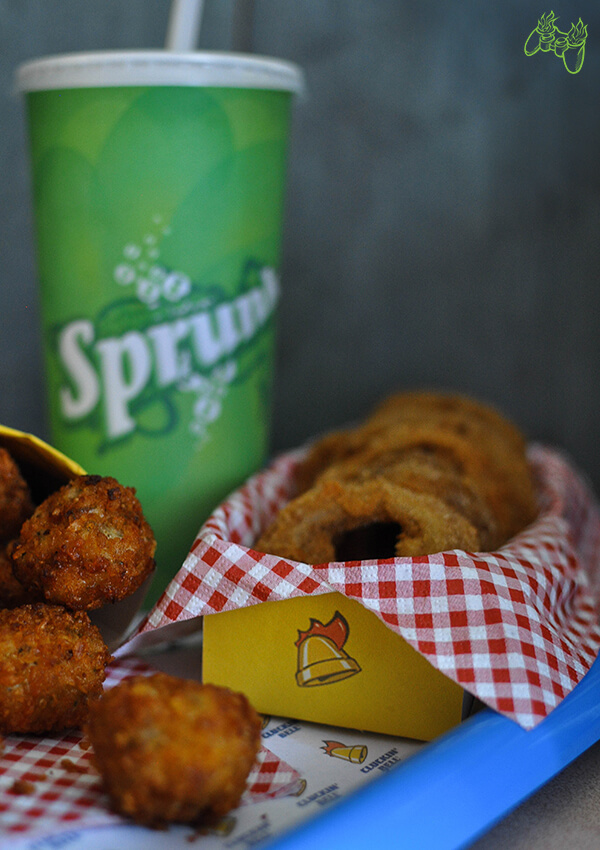