If I had to name one game that I could not wait for in recent months, it is definitely Metro Exodus. I liked the previous parts very much and followed closely the next teasers and the first gameplays from the announced new release. I admit that I was a little anxious about changes in the formula due to so-called “exodus”, because the hermetic, dirty atmosphere of the Moscow metro is the thing that attracts the most in this universe. Surface exploration already happened in previous parts, but these were rather episodic actions, and all of them happened rather on a small area. This time, the creators were to give us a long train journey through Russia and semi-open locations requiring a wider exploration. The teasers from the game were very promising, especially in terms of graphics, which promised to be extremely realistic and rich in details. I am writing this entry from the perspective of the game completion and I must admit that this is one of the better post-apo games I’ve played!

Graphics keep the promised high level (also on the console – no significant FPS drops), beautifully made, extensive locations in different seasons with variable weather, interesting places to explore and various buildings that can be seen as custom-made. This is one of the few games in post-apocalyptic climates where you can really feel the hardships of surviving on the contaminated surface – aiming is not so agile (we have some equipment on us, after all), it is harder to run on the muddy terrain, which additionally contributes to the contamination of our weapons, and if we do not clean it (of course, provided we have the right chemicals), then we risk them being jammed during the fight. Vigilant mutants do not allow us to wander freely on the ground, but strategically approach the route to our goal. In addition to open locations, the creators have not forgotten about dark, claustrophobic places, which we often have to enter to continue the storyline. I warn arachnophobes like me – one of these stages is particularly hard for us, you know, no lighting, full of cobwebs, too little ammunition …Generally, on higher difficulty levels, we have to stay alert all the time and although one would like to feel like on vacation thanks to many beautiful sceneries, it does not allow too long and carefree moments of respite. What is more: a large arsenal of weapons and a wide range of their modifications, interesting interactions with companions, all effects such as dirt k mask, Artyom’s heavy breathing, lack of visibility during severe weather conditions – all this makes this title a very immersive experience.

The game, of course, is not without flaws – it would be nice to improve long loading screens (I played on the console) or human AI, as it often happened that the attacked NPCs ran into random places, practically exposing themselves to a shot from my sniper. This does not really irritate in the long run, especially as the game often suggests a stealthy approach, so I can turn a blind eye on this, having in mind so many advantages. The only thing that frustrated me is the saving system – there are only two options, quick and automatic one. It happened to me to forget about the quick save and the game automatically overwritten the save when I was seen by the enemy, so I had to play again from the last quick one. Maybe it was a deliberate deisgn to make the game even more difficult, but here I could use some more freedom. Nevertheless, Metro Exodus is a serious candidate for the game of the year – anyone who likes post-apocalypse even a little, should get to know this title as soon as possible. It is a beautifully embedded, immersive gameplay equipped with with what is best in the Gluhovski’s universe. It gets 9/10 note from me!

As for the culinary elements, the whole game has practically no verbal references to specific dishes. But that does not mean that the culinary themes have not been taken care of in a different way – in many locations you can see the samovars characteristic for the Russian cuisine and metal tableware: podstakanniks (glasses in metal holders) or enamelled pots with floral ornaments. Often we have the opportunity to see how the characters cook something on the hearths or hold the cups in their hands. We will have a one siginificant feast in the game – I will give more details in the next entry, because there are two dishes that I would like to recreate, so let us leave it for the next blog entry. This time we will focus on the drink – because our railway crew clearly does not save on hydryting their body in various ways;)

In addition to the most obvious drink among Volga’s people, you also need to provide the body with a truly hot drink. Since in the game samovars appear so often, my first association was sbiten – a traditional Russian drink based on honey, known since the XII century, very popular until the nineteenth century, in which it was replaced bu tea and coffee. However, it was given back its glory quite recently and is produced on a massive scale in bottles, like beer or kvass. In times of its fame it was possible to buy it from Sbitenshchiks, who carried containers with this wonderful drink. In folk medicine, sbiten is appreciated for warming and nutritional values, and depending on the ingredients used, it has anti-parasitic, detoxicating and anti-inflammatory effects. Recipes for traditional sbiten vary depending on the regions, but the main ingredient is honey (once molasses) and spices and herbs (like mint or lemon balm), and sometimes also hops. It happens that berry jam or currant or raspberry juice is added to the mixture. Due to the high dose of sweetness, it is good to drink it with lemon – unless of course we are able to afford such delicacies in postapocalyptic conditions (because dried spices and honey can easily endure the biggest disasters);) Interestingly, the drink is suitable even during warmer seasons – then it is drunk in a chilled form.

It seems that sbiten is nothing innovational – but there is nothing better than a small portion of this drink during a colder evening after returning from a walk or during a cold. It warms up pleasantly, strengthens the body and at the same time has an unusual taste thanks to the combination of various ingredients – it is worth experimenting with various herbs and spices to find your favorite one. Certainly no stalker would refuse to take a vacuum flask with it for a longer trip! 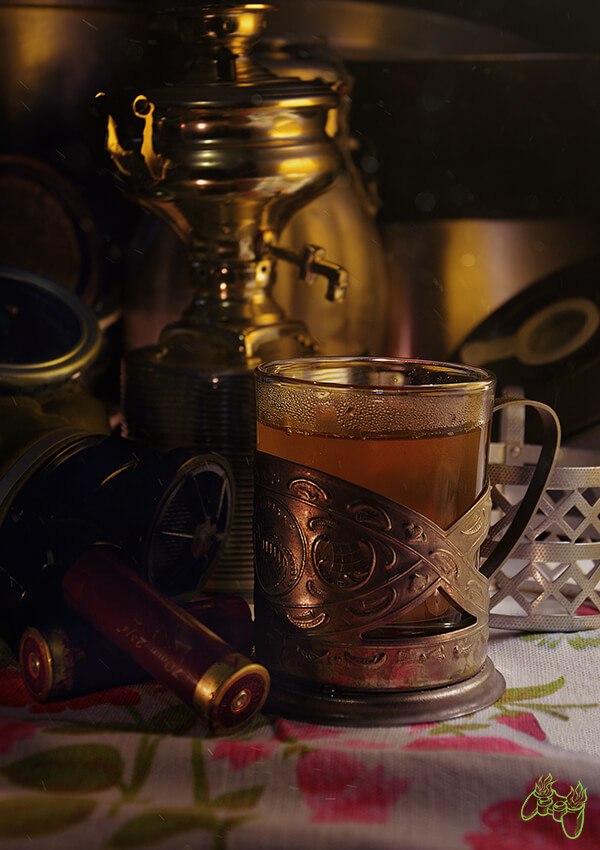 for 1 liter of water

Mix the water with honey in a pot, heat to boiling, stirring frequently, then cook for about 20 minutes on a very low heat.

Add the spices and herbs to the pot, mix and cook another 5 minutes.

3. POURING THROUGH THE STRAINER

Set the saucepan from the burner and pour the drink through the strainer to get rid of the remaining spices.

Pour hot sbiten into glasses and serve with lemon juice. You can also add a bit of berry jam to diversify the taste. Take off the mask and enjoy the spicy, sweet taste of this Russian winter ambrosia!

This blog entry was possible thanks to Techland Wydawnictwo, which provided us with a copy of the game and is the publisher of the game in Poland. 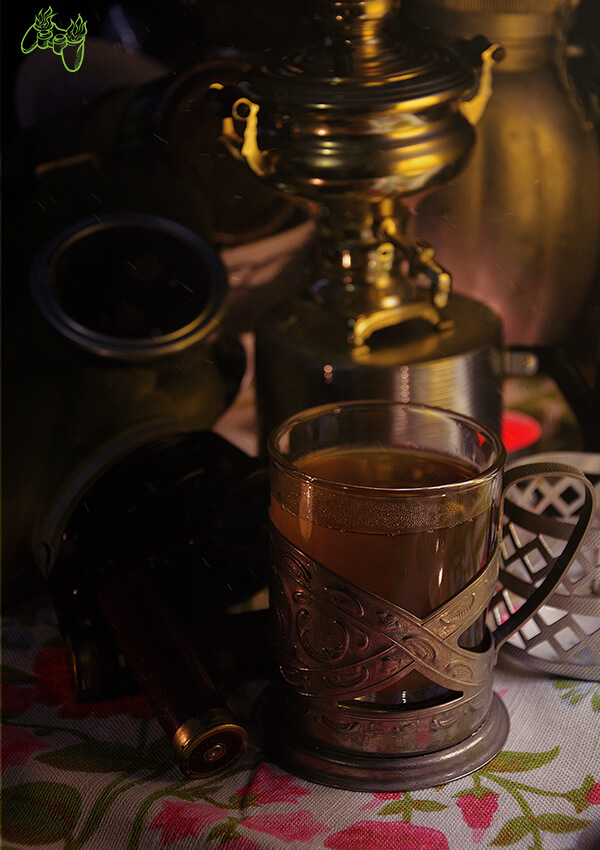 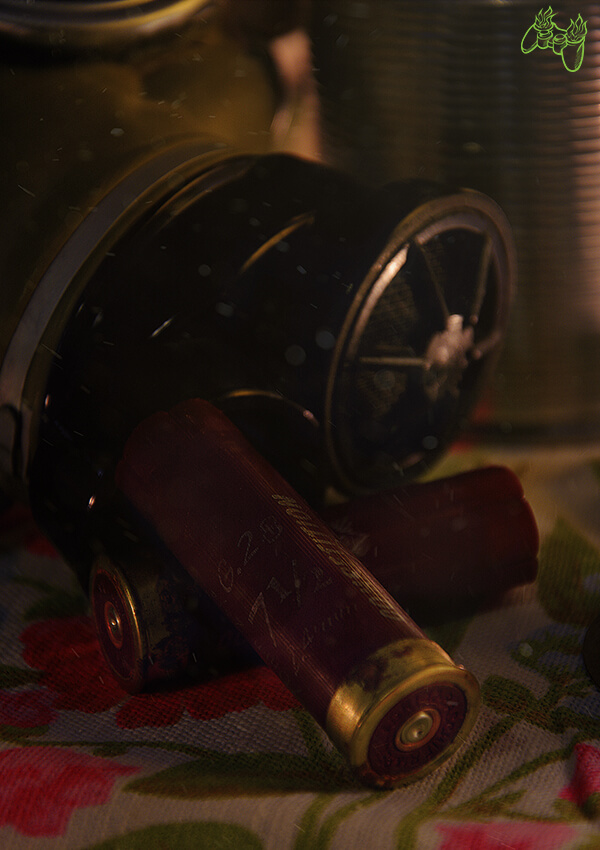 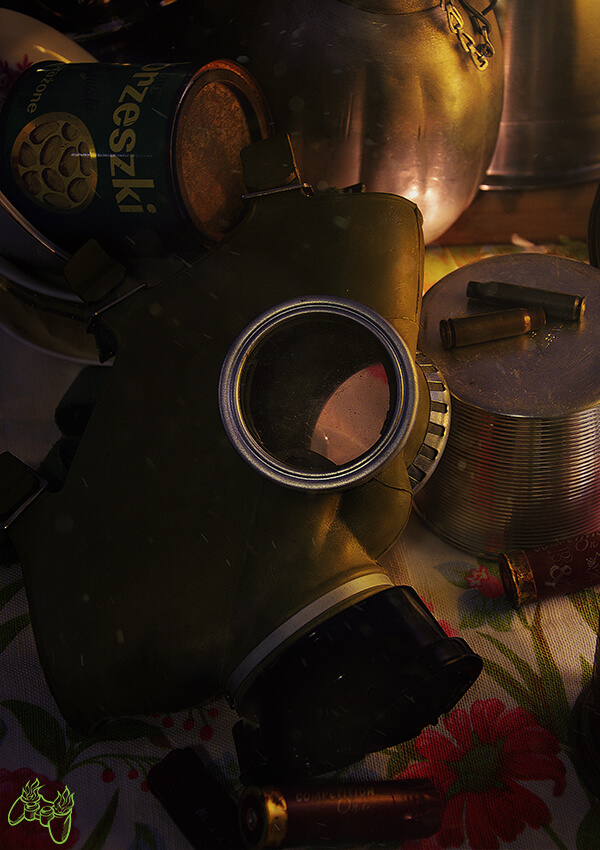