Starting the first playthrough in Death Stranding, I approached this title with some distance, and even a little bit of anxiety. On the one hand, quite a huge pre-release hype for the first production from the independent studio of the legendary Hideo Kojima, curiosity awakened by mysterious trailers, and on the other extremely divergent opinions from the first reviews and rumors that this title is nothing more than just an extensive “courier simulator” with Norman Reedus in the lead role. Have i been disappointed? Definitely not. However, it is not a type of game that can be unanimously assessed as a 10/10 title suitable for each kind of audience. You will find here a lot of interesting, remarkably connected mechanics, intriguing plot, very extensive exploration with pleasant graphics and beautiful music, good acting, surprising plot twists and turns, well-designed aspect related to the “presence” of other players, and really a solid portion of hours to play. However, there will probably be more than one person who will simply get bored with this game – despite the fact that in addition to just running around with cargo on difficult terrain, we have elements of shooting, sneaking, resource management and complex equipment, as well as strategic planning, sometimes the gameplay really slows down and requires from us patience in overcoming subsequent, hard routes. I am a huge fan of exploration and this form of gameplay was very addictive to me, however I am able to understand people who will bounce back from this production.

Death Stranding is a kind of unusual experience that is worth getting to know, if only because of the unusual combination of mechanics and a rather twisted plot (immortal hero with fear of touching, Bridge Babies in jars, chiral network, timefall that causes aging or the so-called “BTs” who are trying to pull our hero into a tarry substance and with which we fight with the help of grenades from the main hero’s excrement (do not even make me explain it, because the main charm of this game lies in discovering the subsequent bizarre things). Therefore, in my opinion, there is no reason to be discouraged by these worse opinions, just try to play it yourself – I liked the game very much and I still did not finish the main plot, because most of the time I bring materials for building roads connecting next Bridges bases to get likes from other players. Also, even such simple things, by definition not very attractive, in Kojima’s game fall out much more interesting than you might expect. Obviously, there are some worse designed elements – I was personally irritated by the same cutscenes repeated when I picked up and delivered the cargo, fight with MULEs or not so very pleasant driving. Still, Death Stranding has a lot of fresh and addictive solutions to offer, the question is whether you will actually get along with it. Maybe additionally for fans of men’s chests I will mention that Norman aka Daryl from The Walking Dead has a lot to offer in this matter 😉

However, focusing on the work of the courier – do we also have the opportunity to play the role similar to UberEats driver? Yes of course! Employers often send food-related resources, whether it is bread, canned goods, or even expensive wine and fish caught in BT’s area. Timefall has quite an interesting application in crops cultivation because it speeds up the growth. The main character,, Sam, does not focus too much on a balanced diet, drinking Monster Energy or Timefall Porter Beer, and eating from time to time some crunchy cryptobots. In one of the missions, we must not only be in a hurry due to the limited delivery time (cold pizza is a scandal!), but also to have in mind the horizontal arrangement of the cargo on our backs. As you can see, even in the face of the BT threat, people can’t do without a hot pizza and this is completely understandable.

That is why in this post we will prepare such a pizza, but of course it will not be without a strange addition, after all, the game is not ordinary, and the recipe must be a little crazy too. I came up with the idea to add something to the pizza that looks like black BT goo, but it still has to taste good. Tapenada, or black olive paste, was great for this, but it is obvious I could not resist changing its basic recipe and I added ground black sesame. It came out … like Kojima’s game – kind of weird but surprisingly good! 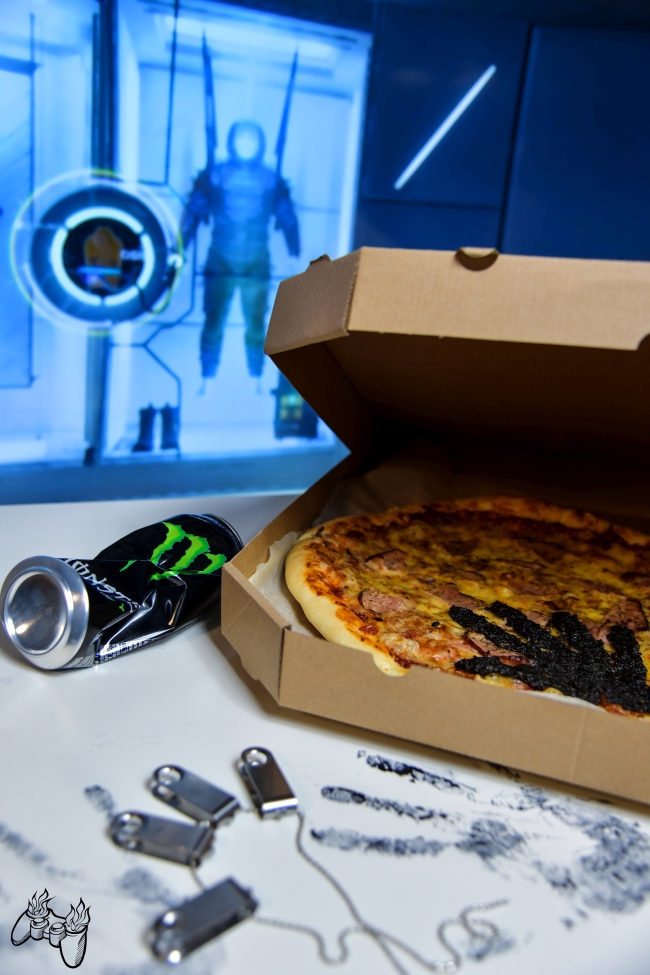 Crush the yeast into a bowl, add sugar, lukewarm milk (approx. 35 degrees) and mix. Then add 2 tablespoons of flour and mix again until a smooth mass, without lumps. Cover with a cloth and set aside in a warm place for 15 minutes – during this time the leaven should grow a little.

Roast the sesame in a dry pan for 2-3 minutes. Control its smell (it’s black, so you don’t know when it burns) in order not to burn it – when it starts to smell more intensively, put the sesame in a bowl to let it cool.

Add lukewarm sesame to the food processor or blender. Blend in pulsating to get wet sand. Then add a handful of olives, honey, crushed garlic, and soy sauce and blend again to obtain a uniform paste. Season with pepper and lemon juice to taste. If necessary, add more ingredient (e.g. olives or salt) to match the flavour and texture of the tapenade to your taste.

Pour olive oil into a hot frying pan, add crushed garlic, some sugar and a pinch of salt. Mix and fry for 30 seconds, then add the peeled and chopped tomatoes, mix and fry for about 10 minutes until most of the liquid evaporates and the sauce becomes thick and uniform. At the end, season with basil and salt.

Pour flour, salt into a large bowl, pour the leaven and lukewarm water. Mix the ingredients with a fork and then knead the mass with your hands for a few minutes until the dough becomes soft and elastic. In the process, you can sprinkle them with a little flour, if it sticks strongly. At the end incorporate olive oil in the dough – knead it until it becomes uniform and smooth. After kneading, put the dough for 1 hour under a cloth in a warm place.

Cut the onion into thin feathers, ham into triangles and grate the cheese.

Punch the rising dough. Then roll it thinly into a circle. Use your fingers to form the higher edges of the pizza.

Transfer the dough to a baking tray (lined with baking paper or sprinkled with flour) and evenly spread with tomato sauce. Spread the onion, grated cheese, ham and sprinkle with a bit of oregano.

Place the pizza in a preheated oven (preferably at least 230-250C/450-480F), at about 1/3 of height and bake for about 10 min-12 or less, so it will get browned edges. After 7 minutes, check its baking status – if your oven can reach high temperatures, the pizza will bake much faster.

Divide the hot pizza into pieces and serve with a little black tapenade. Don’t worry about timefall, build a temporal shelter and stop for a moment to enjoy this delicious pizza. 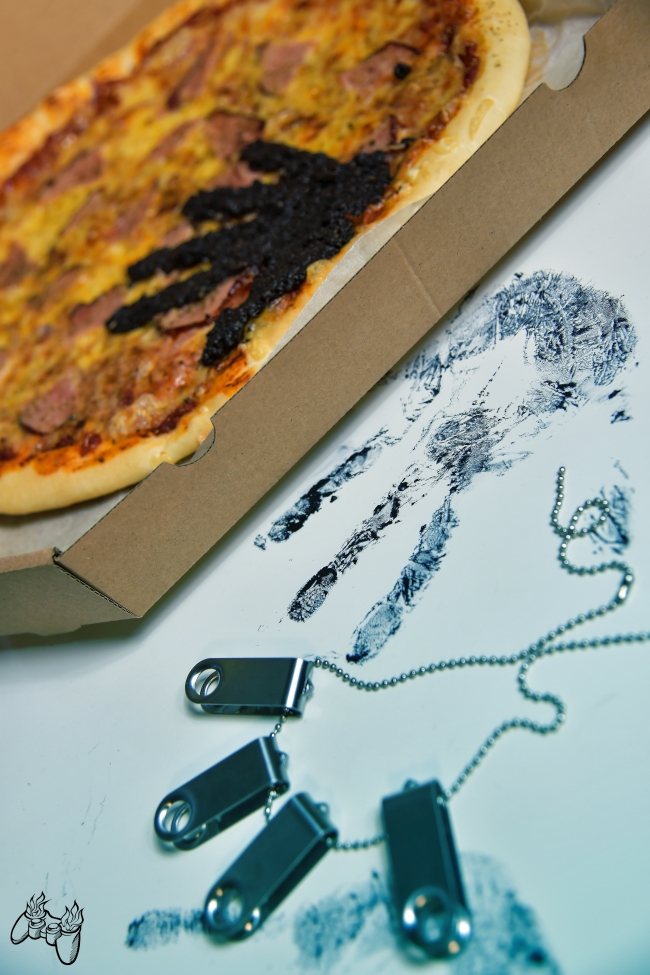 Thanks for PlayStation Polska for a game copy!

You can buy this game, among others, on PSStore PS Store