”War, war never changes.“ Likewise, the presence of an iguana as a culinary object never changes in each installment of the Fallout series, although we aren’t really able to meet a single living representative of this species during the game.

A baked iguana undergoes a quite specific transformation between the successive parts of Fallout series. Inaugurated by Bob Frazier in the original Fallout in a rather unflattering way, the iguana is served in bites accompanied by vegetables or in the form of a whole iguana on a stick (safe version, because you don’t have to worry about the origin of the meat…). In Fallout 2, the iguana can be purchased from Bob’s son, Mikey “The Lizard Dealer”, in the town of NCR. Fallout 3 and New Vegas continue to divide the iguana into whole version or sticks with 5 pieces of meat per skewer (but without the addition of vegetables). Fallout 4 and F76, on the other hand, change the concept a bit and under the name “iguana bits” it shows the pieces of meat in a metal can along with an unidentified siace, while the iguana on a stick itself looks like the iguana bits in the previous parts, with a cut from five to four meat pieces.

So it’s hard to decide which form is the most universal one. We’ve decided on 5 pieces of iguana meat on a stick, grilled or pan fried, like traditional skewers. Due to the lack of a recipe for iguana dishes in the game, we allowed ourselves to interpret the recipe using the most famous drink from the entire series, i.e. Nuka Cola. Due to Polish conditions, we replaced the meat with the most similar tasting chickenmeat (Bob’s son also claims that iguana bits tastes like chicken) – although if you are in North America, you can prepare these skewers from real iguanas (except that its meat should be boiled in water with salt for half an hour before it’s roasted). We marinated the meat in cola with the addition of jalapeno pepper, the rest of the ingredients, although quite stretched for post-apocalyptic conditions, are necessary to obtain a better taste for this dish.

So, are you ready to eat the famous iguana on a stick? 😉

Add sugar into the saucepan and heat it over medium heat until it’s slightly caramelized (it should be slightly browned).

Then add the cola, soy sauce, ketchup, garlic, and 2 pinches of salt.

Cook the marinade over medium heat for 20 minutes, until most of the liquid evaporates (at least 1/3 of its original volume), so that the marinade has a consistency similar to liquid honey (it must be thick enough not to slip off the meat when grilling).

At the end of cooking, add lemon juice (first 2 tablespoons, try and add more if necessary), finely chopped jalapeno or chili flakes (adjust the amount yourself) and a more salt if needed. Cook for a few more minutes until the desired consistency is obtained. Set aside to cool.

Clean the chicken meat and cut it into large pieces. Add meat chunks into the completely cooled marinade and coat in it. Marinate the meat for at least an hour, covered, in the refrigerator.

20 minutes before frying, take the meat out of the refrigerator. Then put the meat pieces on skewer sticks (if you are grilling over charcoal, it’s worth soaking these sticks in water for about an hour before stuffing the meat, they won’t burn during grilling). Don’t discard the leftover marinade – it will be needed to grease the meat during grilling.

Roast the meat on a traditional grill or fry in a frying pan over medium heat on each side until the meat is well browned. Be careful with the power of the fire as it can burn easily due to the high sugar content of the marinade. Spread leftover marinade on the skewers during the first minutes of frying. Meat should be ready in 10-15 minutes, depending on the size of the meat pieces.

Eat iguanas immediately after grilling. They go well with InstaMash or BlamCO Mac & Cheese.
See for yourself that the taste of an iguana is beyond human comprehension! (pun intended :D). 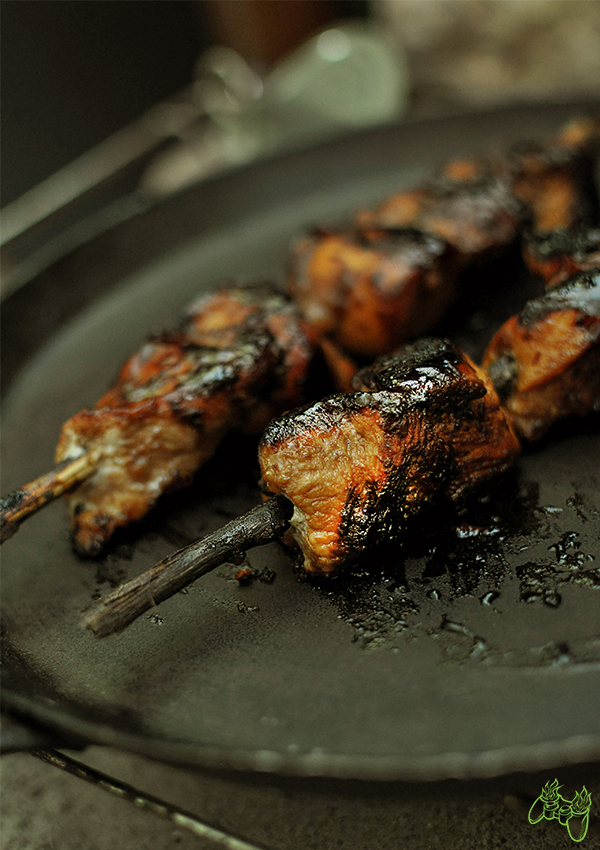