Like the other food items from the 5th game of The Elder Scrolls series, Honey Nut Treat can be found both in the equipment of local merchants, as well as be found in visited houses or even dungeons. It is a quite popular, sweet snack that restores 5 HP points – unfortunately, it has not been included in the list of products for crafting on the hearth or in the oven. However, with the addition of Hearthfire, this sweetness can be used as a gift for an adopted child, which allows you to obtain a Gift of Charity. 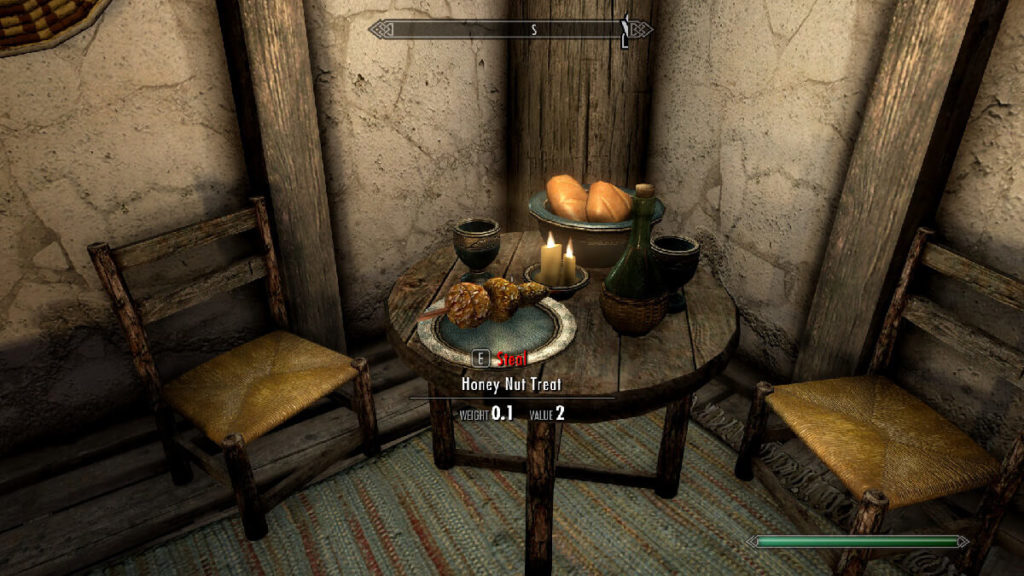 Honey Nut Treat is the perfect quintessence of the simplicity of Skyrim cuisine – nuts in various forms, honey and cereals. Simple, nutritious and tasty at the same time. Maybe the appearance leaves a lot to be desired (visual associations are probably obvious) – but it do tastes great. You do not necessarily have to place balls on a stick, it’s enough to form them to the size of standard pralines and serve them on a plate. Dovahkiins recommends it for dessert!

Cut nuts roughly into smaller pieces – walnuts into quarters, hazelnuts and cashews in half.

Add honey and peanut butter to the saucepan. Heat on low power for about 1 minute, stirring constantly. When the mass becomes smooth and combined, turn off the heater.

Put nuts, peeled peanuts and oatmeal into a warm honey mass. Mix everything thoroughly. When the mixture has cooled down a little, put it under the cover for 30 minutes in the fridge.

Take mass out of the fridge and form balls of various sizes, which should be put on sticks. Chill them in the fridge.

Remove Honey Nut Treat from the fridge about 30 minutes before serving. It goes well with a mug of dark, bitter beer.