Okay, I admit it. I’m caught up in Destiny again. Although at first I felt terribly lost after a year’s break in playing – I started right away with Shadowkeep and I hit the beginning of the new Season of the Worthy, so many things have changed dramatically since my last visit in this game. Well, thanks to my friend Kiniu, a veteran Guardian, this start wasn’t so rough – he gave me some important tips and somehow I got through this high entry-level. And although sometimes it is frustrating, you know, the whole search and need to know which quest is for what and where to go now, when you have so many activities available on each planet – it also has its own, attractive charm. And probably because every time I tell myself that I will play just for 1.5 hours to take a break from the typical single-player games – it’s only after about 3-4 hours I notice that probably the original plan did not work out at all. 😀 And it felt just like a moment – I suddenly had 20 seasonal rank acheived! Well, it’s such a role of the Guardian, you have to use the Light given to us for a good purpose, right?

As I wrote in the last entry with recipe for small rice cakes, Destiny 2 does not have an arsenal of culinary references – that’s why this entry is a bit more fun with the convention of inspired food – glimmer as the primary currency in Destiny has no consumption purpose in the gastronomic sense. Although earlier, in 2015 during the Festival of the Lost event glimmer appeared as a consumable under the name “Glimmer Chew”. Hence, I came up with the idea to prepare a dessert that would look like a glimmer and be at the same time very chewy. My first thought was ordinary jelly in sugar but it was a bit too little for the recipe, which is why I chose a homemade, slightly simplified version of fudge – that is, soft candies with a silky consistency. I combined them with pieces of jelly and sweet & sour topping, which allowed to refer to the glimmer glittering elements. Although such confectionery products are totally not my specialty and it was a kind of eccentric experiment – I admit that the taste came out really interesting. I hope that those of you who are Destiny fans will appreciate these efforts! And those who have never played – Destiny 2 in the basic version is free-to-play so it’s always worth checking if you’d like it. Well, it’s time for some important mission – dessert! For its completion you will receive … a lot of delicious glimmer! 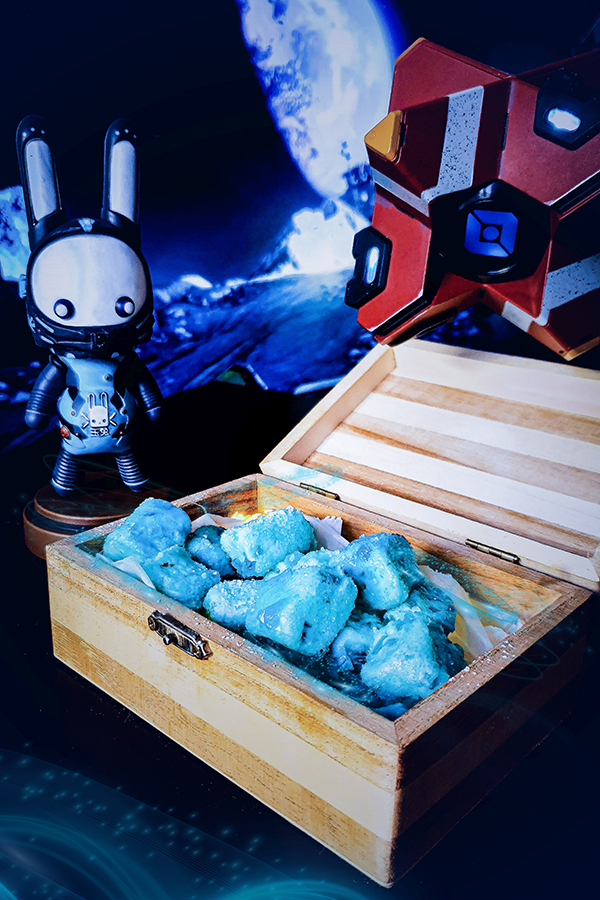 Measure 1/3 of the amount of water given on the jelly packaging (standard it will be about 80 ml – if you make only one portion of dessert, because you only need half a jelly package for the recipe). Bring water to a boil in a pot, then turn off the burner. After a few minutes, add jelly podwer into hot water, mix well until the gelatin dissolves (do not boil!). Then pour the liquid into a flat dish and after cooling, put in the fridge for a few hours (under cover, so that the jelly does not take the smell of other products).

Pour a glass of water into the pot. Place a metal or glass bowl of similar diameter on the pot, so that the bowl stands on it. Heat the water in the pot until it boils, put the crushed chocolate into the bowl and slowly, stirring, melt the chocolate. When it is liquid, add concentrated milk, stirring vigorously all the time – the mass will quickly thicken and become elastic like toffi. When this happens, turn off the burner and remove the bowl from the pan. Wait for the mass to cool completely.

Add blue liquid dye to the mass, mix well. It is possible that white chocolate (in practice, its color is slightly yellowish) in combination with the blue dye will start to turn green – then you need to add much more dye and the color will even out.

Take the jelly out of the mold and cut into small cubes. Toss into a completely cooled chocolate-milk mass and mix. For a better visual effect and a varied structure/crunchiness, white-blue sugar sprinkles can also be added to the mass.

Put the mass into a square, flat container lined with baking paper. Align the top with a spoon. Cover and put in the fridge for at least a few hours. If you want a harder consistency, you can also keep the mass in the freezer 30 minutes before serving.

Take the cooled mass out of the box and remove the paper. Cut the mass into squares. Mix the fine sugar with citric acid powder in a bowl and coat the pieces evenly in this mixture.

Serve chilled. Perfect for chewing between one and another event in the game! Let the richness of the glimmer taste delight you! Mission accomplished! 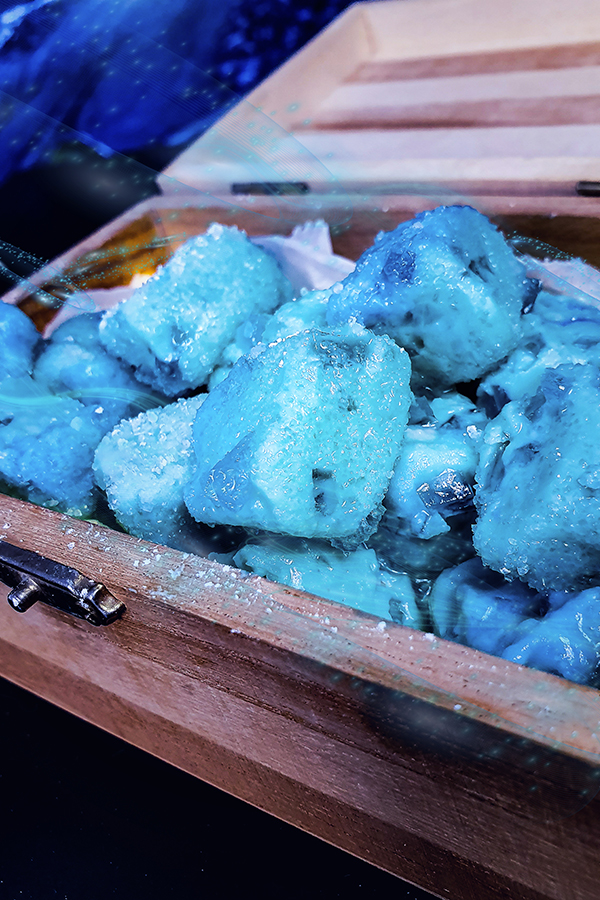 Props for photo session were delivered by Cenega.

You can order game here (Polish store) Muve.pl. or in chosen stores with games in your country.