The videogame market is not just triple A games – the indiedev is currently going through dynamic development, both on the world and the Polish market. A lot of productions surprise us with their attention to detail and original world creation, addictive gameplay or intriguing, complex plot. Their variety and fresh approach to virtual entertainment is an evidence for the hidden potential in niche productions. What’s more, sometimes so-called “indies” don’t only want to provide entertainment, but a lot more and then they are also part of the serious games type – they can touch upon difficult, social topics, and sometimes they even can be considered as intellectual entertainment. 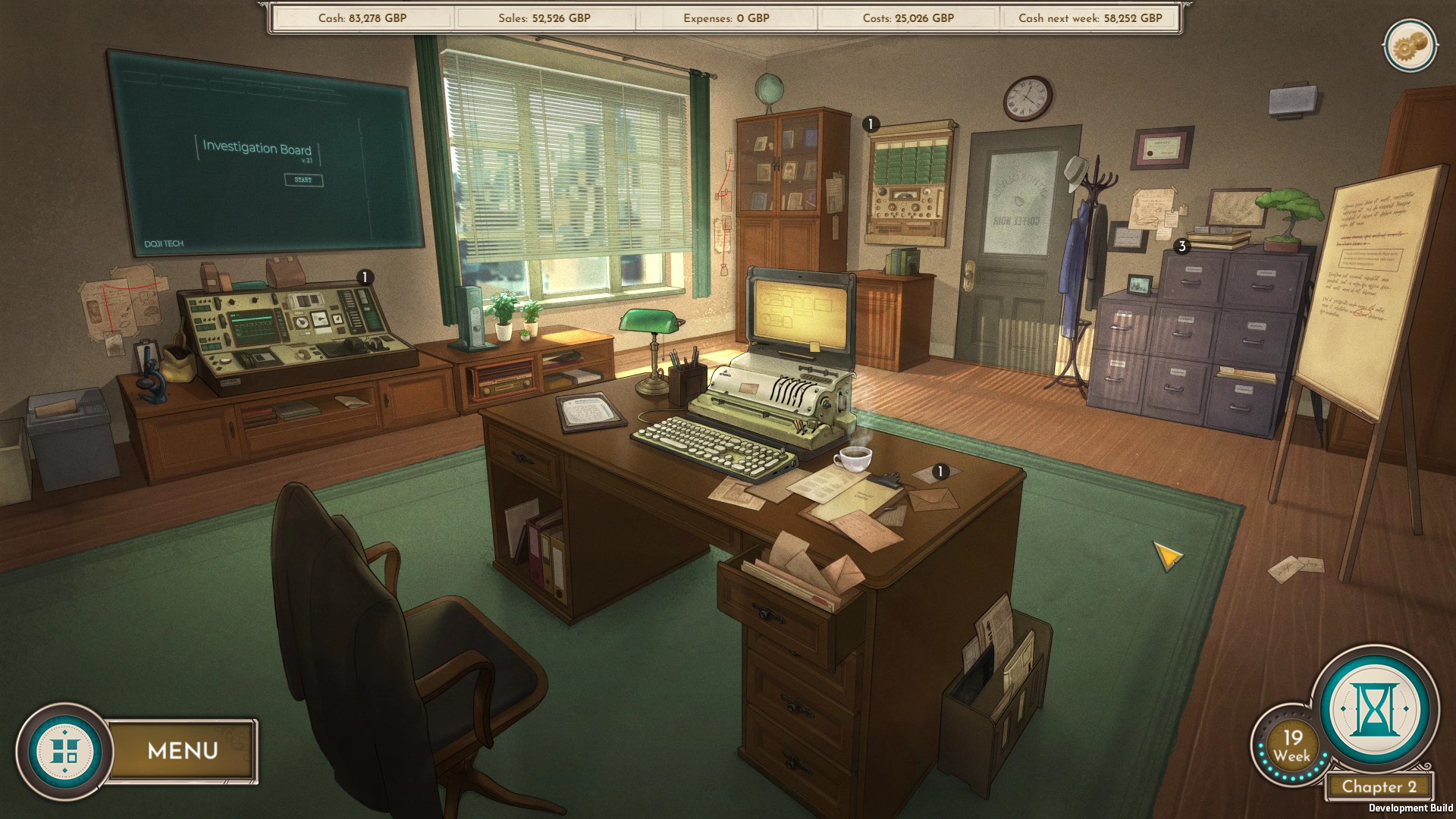 The detective game Coffee Noir produced by Doji S. A. is a great example of an indie serious game. At first it was supposed to be a product only for business clients, created as a browser game. However, the positive opinions motivated the developers to transform the game to a more casual product, intended for the broader audience of gamers. In the end, the game evolved so much that it got practically completely improved in terms of the plot and audiovisual content.

But what’s even more interesting – guess who did own’s share in this project and is currently working on it? Ha, of course I’m talking about myself! In the meantime, Jakub joined the ranks of the Nerds’ Kitchen team and now he’s responsible mostly for the videos, but professionally it was him who started the whole idea of the Coffee Noir game. So it is a system of interconnected vessels and I hope that our efforts will create a good product. You can play it from 30/09/2021 to see for yourself if we managed to combine such different genres into one. Both on GoG and Steam you will find a free demo that will allow you to familiarize yourself with the basic mechanics of the game and assess whether you want to invest in the full version.It’s really the first game that I’m creating and supervising so comprehensively, so your support is priceless for me! 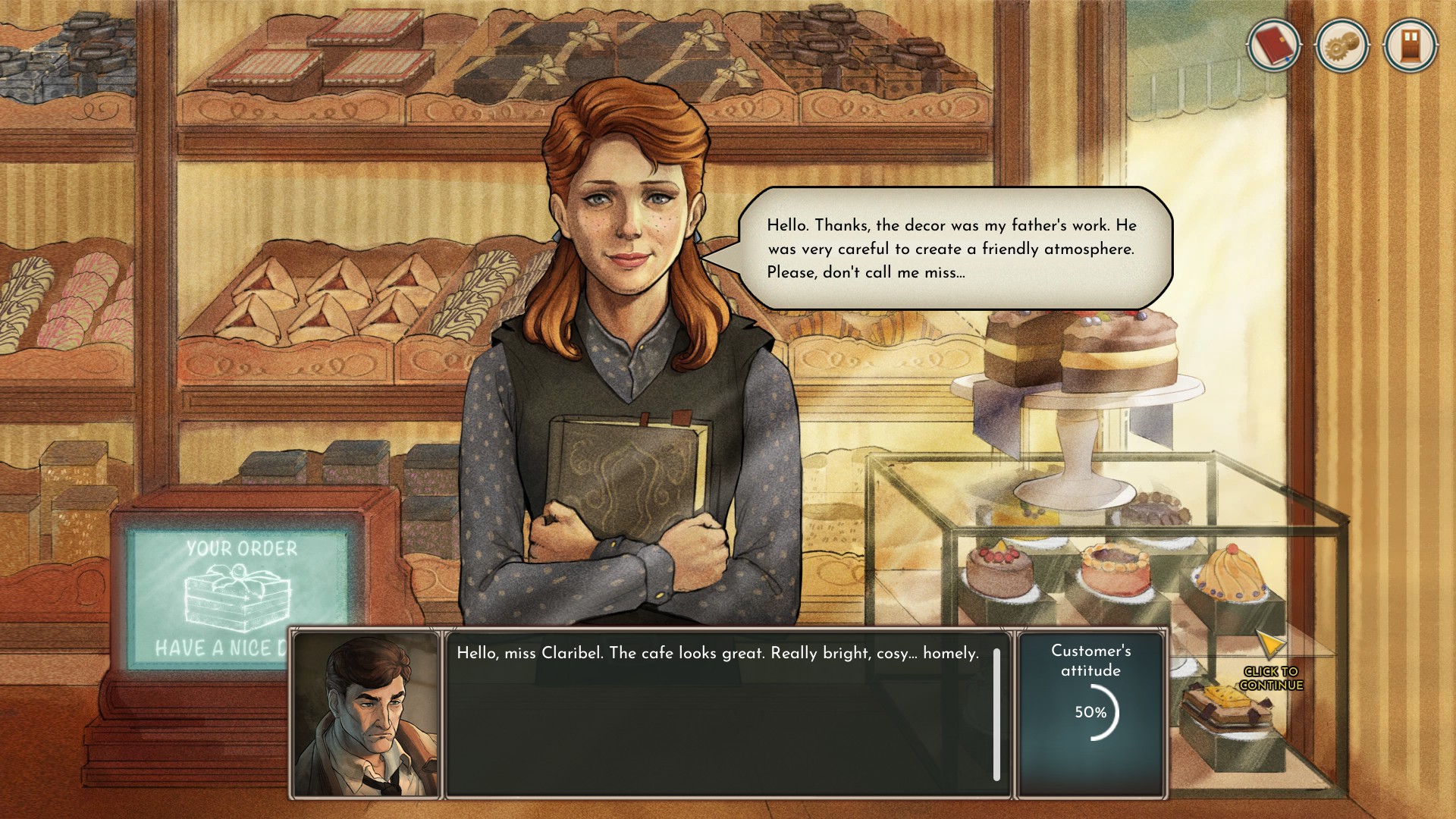 The plot itself, in general – it’s 2021, coffee rules over the world and Neo-London, the place where the action takes place, is crazy about it. We play as Arthur Oliver, a private detective, who returns to London after years of being far away and he get unexpectedly involved in one of the local mysteries. He has to investigate the dissapearance of one of the coffee market businessmen – Richard Kersey. The daughter of the missing man suggests that Oliver should cover his actions as a manager of a coffee producing company and reach contractors who were tied to her father’s business and might be involved in the whole matter. Unfortunately, to be reliable, Arthur has to learn enterprise management – so the investigation’s success relies on acquiring certain business and negotiating competences… Coffee Noir efficiently combines elements of economical strategy and noir-style atmosphere, intriguing crime novel narration and graphic design just like in american comics. 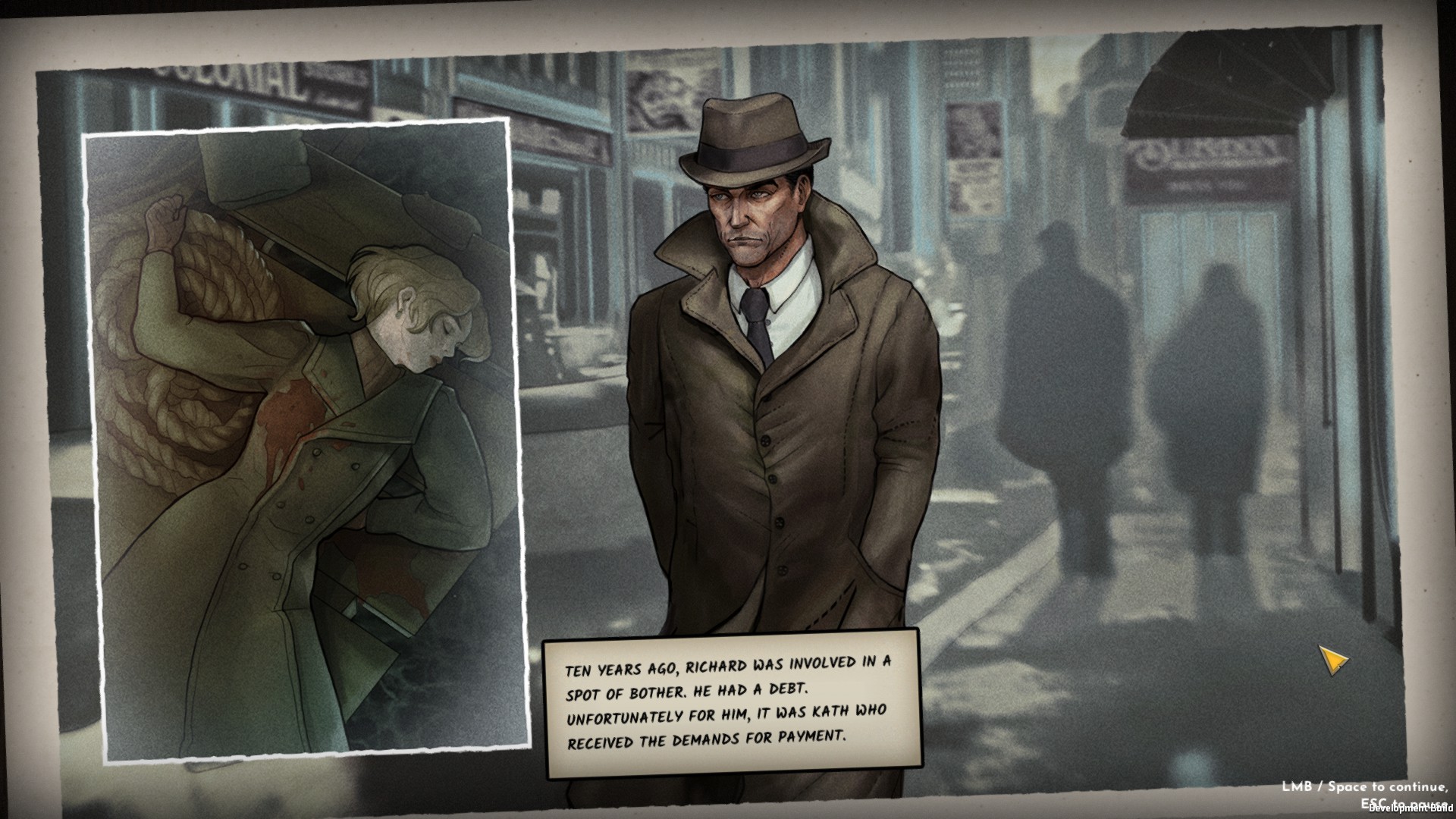 Of course, my work on the game production couldn’t happen without putting culinary elements into it – so the title coffee doesn’t appear only in cups and teacups, but also in the dishes of Neo-London’s inhabitants. One of my inventions created for the game is the Coffee Noir cake, which we can see in the first negotiating scene during the game. The daughter of the missing Kersey, Claribel, has her own coffee shop and is the first contractor on our way to power on the local coffee market. Of course, every respected coffee shop has to serve delicious desserts – that’s why I created a recipe for a cake, which perfectly fits with its character into the game’s atmosphere itself, and our artist included the cake in the mentioned scene. In addition, another scene takes place in a restaurant, and our detective, to obtain information, bribes the interlocutor with the appropriate selection of dishes from the restaurant’s menu specializing in meals with the addition of coffee! 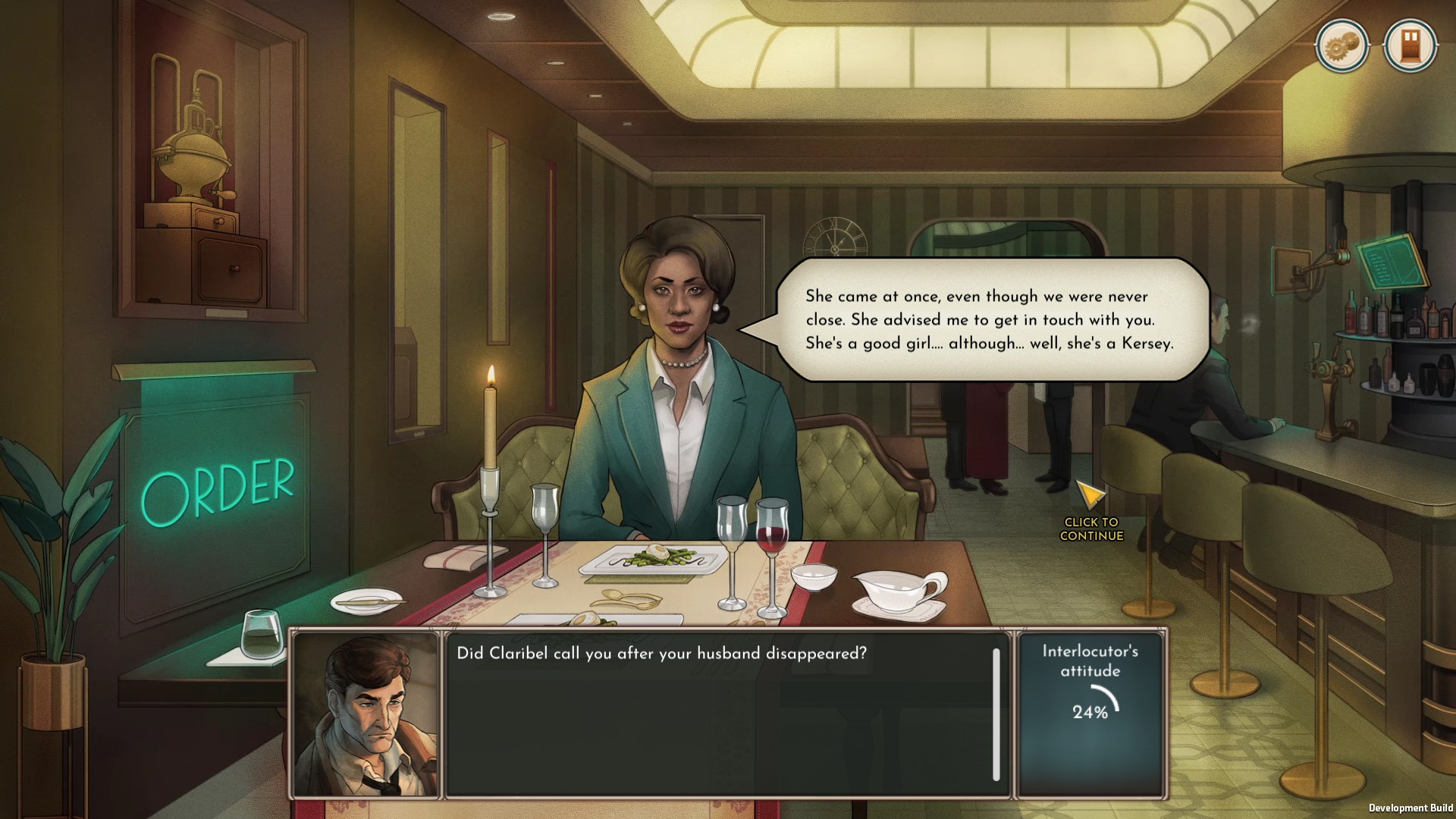 A very chocolate cake with a distinct coffee aroma with a soft, moist structure, soaked with alcohol and served with silky whipped cream with an additional portion of coffee – who could resist such a temptation? Especially when its preparation is pretty easy and requires only a bit of time. Ideal for coffee lovers! So, while waiting for the game’s premiere, prepare the cake and then savor this delicious retro-style cake. You can’t say no to it 🙂

Put 4 teaspoons of coffee into a cup, boil the water and pour it into the coffee (3/4 of the volume). We put it aside to let it brew and then cool.

Melt the butter and put it aside to cool – it should take 1/2 of a cup.

Sift flour and cocoa through into a big bowl. Add salt and baking bowder. Mix and put aside.

Crack the eggs into a second bowl. Add sugar and mix with a whisk or mixer until you get an uniform, a little foamed mass. While still mixing, add the cooled molten butter and buttermilk (it should have room temperature) and at the end slowly pour in the cooled espresso. 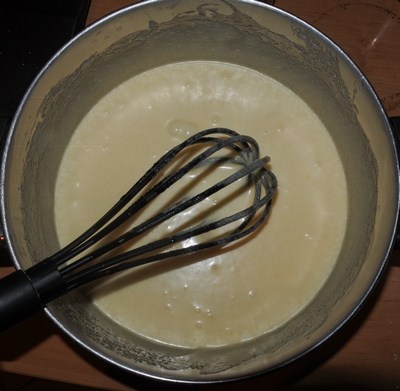 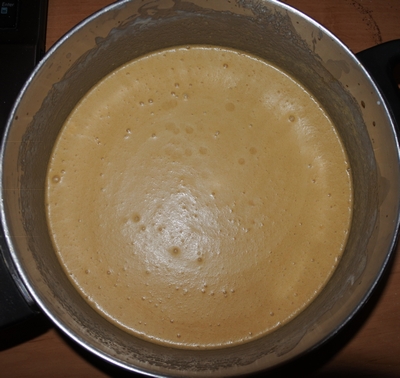 Add moist ingredients to the dry ones and mix just to the moment when they are combined.

Divide the cake into two portions and pour it into round baking dishes smeared with butter and with baking paper in them (you can also bake one at a time, if you only have one dish). Put the cake into the oven warmed up to 180 Celsius degrees, with the top & bottom option. Bake it for 30-35 minutes – after that time check it with a toothpick, which should be clean after putting it into the cake – if it’s plastered with raw cake, bake it a little longer. After baking, carefully get it out of the dish and leave it on the grate to cool down.

Make the lower part of the cake even with a knife to put the other one on top of it (the cake usually bakes with a slight mound). Soak both parts with the alcohol (vodka or coffee liquor) or strong tea brew (in the version without percentages) – lubricate the cake on the top with a brush or slowly pour the liquid with a spoon. Cover the cake with paper and leave it in a cool place for 4h. 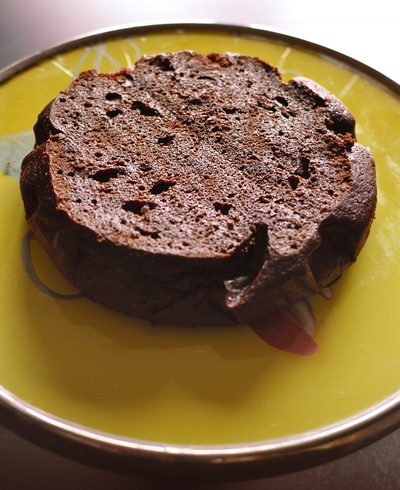 Pour the cold cream into the bowl, add a pinch of salt and whip until stiff, add powdered sugar and coffee at the end (begin with about 2 spoons – and try to add more coffee if needed). The amount of sugar can be also modified. Smear half of the cream on one part of the cake. Leave the rest for serving – keep it in your fridge in a closed container. 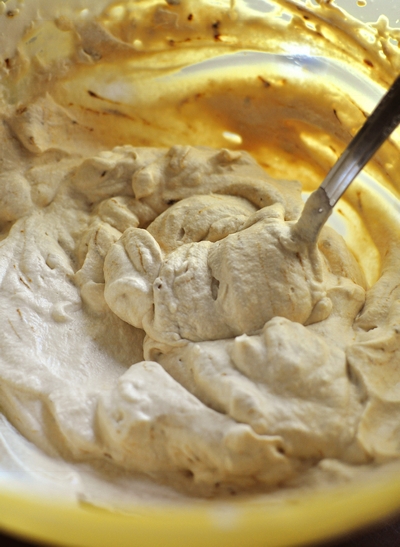 Put the second part of the cake on the first part covered with cream. Cool the cake in a fridge for 2-3h (remember that it should be in a closed container so that it doesn’t absorb the smell of other products). 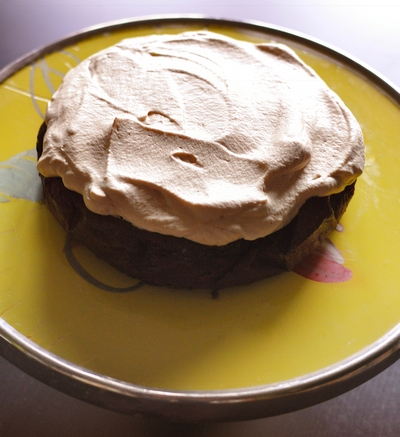 Serve the cake after cooling. Cut it into pieces and pur some whipped cream with coffe on it.

Serve with a cup of good coffee, switch on your gramophone and relax in a comfortable armchair, thinking about solving the mystery of Richard Kersey’s dissapearance… 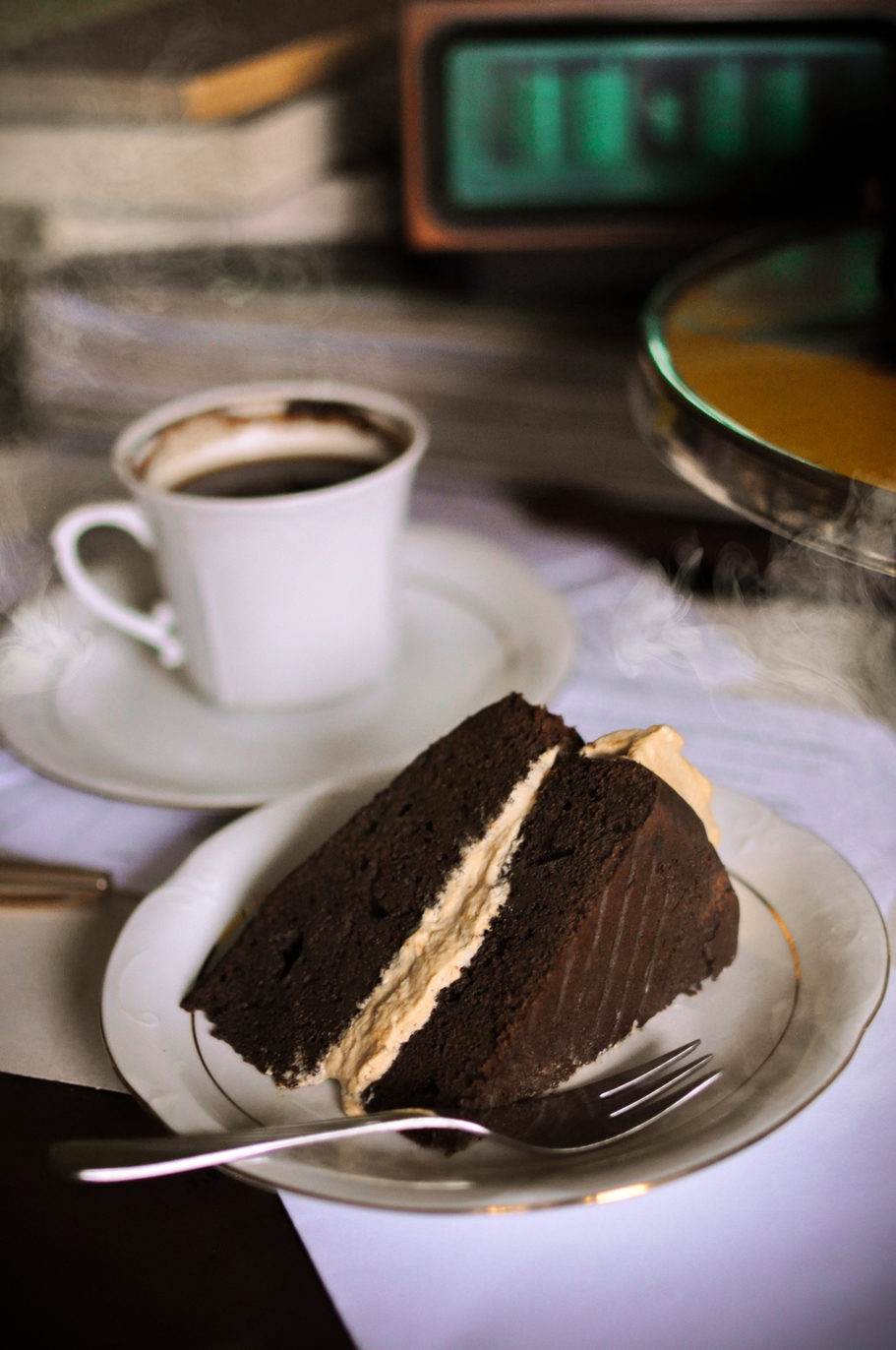