Another exclusive release for the Playstation console is the production from Bend Studio, entitled Days Gone. In short – postapo game in North America, a mysterious virus that turns people into so-called “Freakers”, Deacon St. John, a motorcycle gang member, in the role of the main character who does not quite cope with the painful past and is longing for the old world order. This does not sound groundbreaking so I was not very excited about the premiere, and the first demonstrations caught my eye mainly because of huge hordes of Freakers that we have to fight with. However, after a few hours of gameplay I knew that Days Gone would attract me to the TV for much longer than I could have expected. [EDIT 2021: from time perspective, after finishing the game, I really think it’s one of the best games released for PS4, and maybe still a little unappreciated title, so if you haven’t played it yet, do it, you won’t be dissappointed]

Although the game is struggling with optimization problems (huge FPS drops in some places), numerous loading screens, clumsy AI of human opponents, funny glitches (shovel hanging in the air or lack of body in the NPC), overally, it’s a very compelling game. You can see that many mechanics have been derived from other productions, but such a mix is quite well-glued and clearly engages you in the gameplay, not letting you get bored. Do you want to eradicate the hordes of Freakers or take outposts from local bandits using the entire array of available arsenal and skills? Or maybe fight with a bear and get his meat for one of the camps? In your free time, you can look for finds and explore the local, somewhat dilapidated attractions of Oregon. You can also dive yourself into Pimp My Ride mode and get your two-wheels loyal companion pimped for the credits you have earned. There are also many cutscenes that allow you to get on with the story (which is rather slow-pacing, so do not be discouraged at the beginning). Add to it quite diverse numerous main quests and we are given a game that really can absorb you all day long. Oh, I would forget about the beautiful Oregon areas and weather system – visiting the next location with dynamically changing weather affecting the ground is certainly a pleasant experience. Maybe it’s not the pretender for the game of the year for me, but with a clear conscience I recommend Days Gone to all of you who like post-apocalyptic and multidimensional sandboxes. As you get involved, the syndrome of “one more mission” is more than certain.

At the beginning, I thought that in Days Gone we won’t find many culinary elements. However, the food motif is implemented not only in the mechanics of hunting, collecting plants and taking them to nearby camps (more on this in the next post, where we will cook some venison;)), but also appears in the environment creation layer. A great example here is the Hungry Jim’s diner, which we see at the very beginning of the mission “It;s not safe here” at Marion Forks. The camera draws our attention to the unusual advertising of the restaurant – it is a few-foot tall figure of a lumberjack resting his hand on a pile of pancakes topped with sauce. What’s more, when we enter an empty and somewhat broken interior, we can see a collectible on one of the tables – this is a detailed menu of Hungry’s Jim diner (see screenshot).

Might seem as irrelevant detail, but I had a smile on my face for the next 5 minutes, that someone took care of such details. I decided that it should be honored with the best recipe for American-style pancakes that I know (it is a mix based on several recipes – including tricks frombuzzfeed). For this we made delicious homemade salted caramel, which has a similar color to the sauce shown on the giant advertisement. In stylization, we referred to the lumberjack theme and forests that surround the Marion Forks area. Gadgets from the game and a copy for testing have been received from PlayStation Poland, for which we are super grateful! 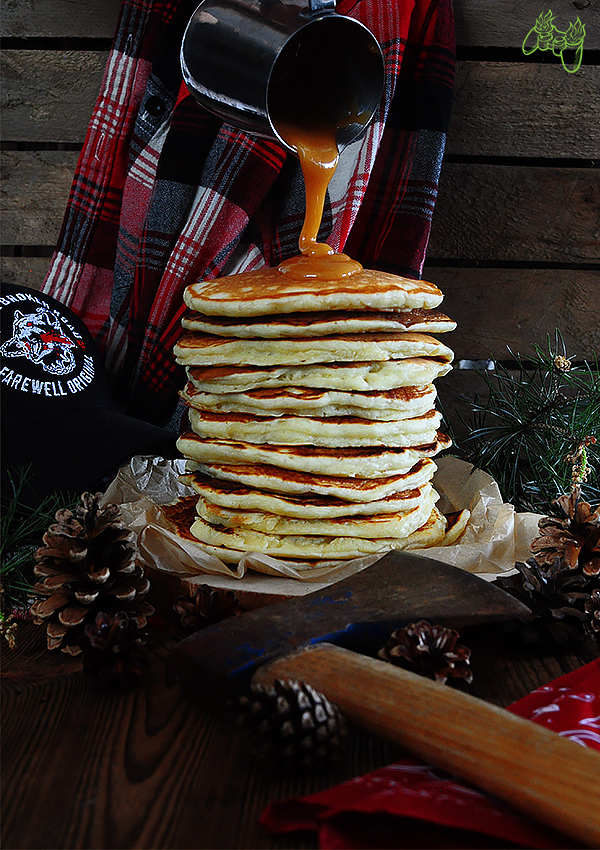 Melt butter in a saucepan and cool it slightly.

Pour dry ingredients into a larger bowl, mix and make a hole in the middle (like a bomb hole;))

Pour the wet ingredients into to the bowl with dry ingredients, directly to the hole. Mix with a spoon only to combine the ingredients. At the end, add whisked whites and mix again with a few delicate movements. Do not stir too long – you can leave clumps in the batter.

Cover the bowl with dough and let it “rest” for about 15 minutes.

Pour the sugar into a pan with a light and thick bottom. Heat on medium heat. When it dissolves, reduce the fire to a minimum and control the color of the caramel. At this stage, be careful not to burn sugar. When the color is intensely amber, add heated cream. Mix it with a wooden spatula and heat at medium power for about 15 minutes. Dense clumps of sugar should dissolve and the final consistency should resemble liquid honey (after cooling, the sauce thickens – if it’s too thick, you can add more cream). At the end add some salt.

Firmly heat the pan, add a bit of butter. Using a ladle, apply a portion of a dough into the center, spread lightly on the sides so that the pancakes are round. Fry on strong fire for 3-4 minutes, until the cake will grow slightly and bubbles will start to appear on its surface. Then turn pancakes over with the spatula and fry for a further 3 minutes. Pancakes must be nicely browned on two sides. Put them on a plate, stacking one on top of the other.

Pour the hot pancakes with liquid, salted caramel. Better eat them fast before the freakers will come and devour them!